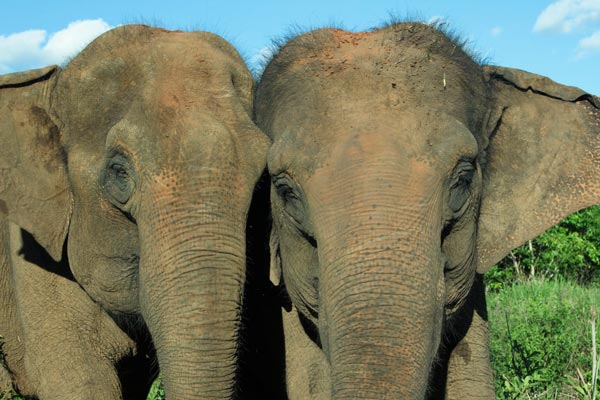 A lot of our posts lately have been focused on our newest resident Rana, while everyone, including us, gets to know her. Today we wanted to talk a bit about Maia and Guida. While we’ve mentioned their past, to try to give a better understanding of where they are coming from, it is only in discussions in the comments section that we have actually spoken about seeing things from their perspective. Maia and Guida are amazing elephants, who have been through a lot, and it should be no surprise that change could be scary for them.

Maia and Guida suffered the life of a circus elephant for decades, then all of a sudden, one day they were confiscated and sent to a zoo. They had a pool (which Maia of course splashed around in) and weren’t forced to perform any longer, but this did not last. The facility didn’t want them long-term, so after a few months they were sent to live on a farm. Their life was still better than when on circus, but because of Maia’s mischievous ways, they ended up on chains and separated from each other because of aggression. This is how they lived for the next five years. And then they came to sanctuary.

Even at sanctuary, their life has been ever evolving. We literally built to be able to accept them, so they weren’t sent to an aquarium instead. So when they arrived, they only had a small 2-acre yard. Construction that had begun before their arrival, continued after, and each couple of months, they were given access to the next completed yard and more space. With each new yard, they opened up more, to each other and to the experience of sanctuary: their self confidence grew, their relationship deepened and step by step, they evolved into the elephants they are today. It didn’t happen overnight, they worked at finding the balance and peace they have now.

Two years into all of this and suddenly another shift, a new elephant shows up. Not trying to humanize them, but stating things in a way that is relatable to many, it’s like bringing a new baby home from the hospital and your other child isn’t sure what this means to the world they have grown to love. After decades of suffering and sterility, Maia and Guida have found their joy and it’s understandable there is some concern about losing it. What does a new elephant mean for their world and future? Rana is their first new elephant, as time goes on, we hope they develop a comfort in knowing this does not mean a change in their happiness, but right now they are still discovering the reality of what all of this means.

There are a million ways they could look at it, they could worry just in general if this means a change for their future, it could be concern about their relationship with each other, things with their humans, space, the list goes on and on. But part of our job is to support them as well during this time and let them know this is still their home and nothing needs to change except that we will offer the same life and love to other elephants as well. While we are all appreciating how perfectly cute and sweet Rana is, we also need to remember that our other girls are perfect as well-each in their own way and that they too need nurturing during this transition They will all figure it out, but they’ll need support along the way.

This morning, all of the girls were nice and mellow. Rana spent the night by the pond and Maia and Guida arrived in the morning before her. After breakfast, when they were all in the same area, Guida came over and approached Rana. Her interactions were all positive and gentle, light touching and smelling, not even any posturing involved. After a few minutes, Guida walked off to one of her favorite trees and shortly thereafter called for Maia (her big deep rumble call). After a minute or two, Maia headed Guida’s way, but also stopped at Rana. She was gentle as well, some touching and smelling, a moment of trunk over Rana’s rump, but not in an overtly demonstrative way. They stayed side by side for a couple of minutes, and then Maia walked off to join Guida and nap in the shade.

They may be baby steps, but they are very purposeful steps that will help each of the three elephants grow.

Your ticket for the: Maia & Guida’s Need for Nurturing