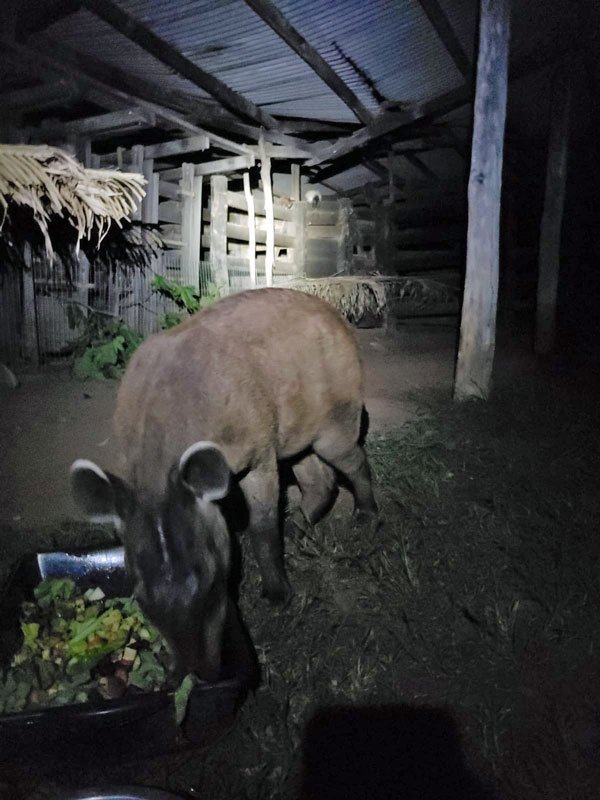 A little Alma update. First, the choice of photo. Many people want to know if Ian the rooster is still spending time with Alma. This photo was taken at 10 pm feed, so that’s a slightly blurry Alma, and in the background, on top of the fence, is Ian. He sleeps in her corral as well, but up high where chickens feel safe.

Alma has been doing very well since she was started on her anti-seizure drugs (stuffing her pill in a banana makes for a nice treat.) She hasn’t had a serious episode since her full dosage was reached. We started at a very low dose to see how she handled it, mostly because of her other physical issues. So far she hasn’t shown a negative response, but her blood levels will need to be monitored for life.

She still has moments when she gets a little spooked and will run. But unlike in the past, she is calm enough that she is not running into objects in her enclosure and is easily calmed by a soothing voice, a scratch behind the ear or her realizing after a moment that everything is ok.

For those who don’t know Alma, she was a rehab and release tapir who quickly showed that release wasn’t a possibility- because she is mostly blind and had seizures. It has taken a long time to not only gain her trust, but for humans to become a comfort for her. As a wild animal our presence was initially a source of stress, but through patience, time and her realizing and accepting we are only there to help, Alma now enjoys her humans.

If you want to learn more about her or our rehab program, you can meet some of the past and present wild animals at the link below.

Your ticket for the: Alma Update (The Tapir)