Update On Alma, The Tapir 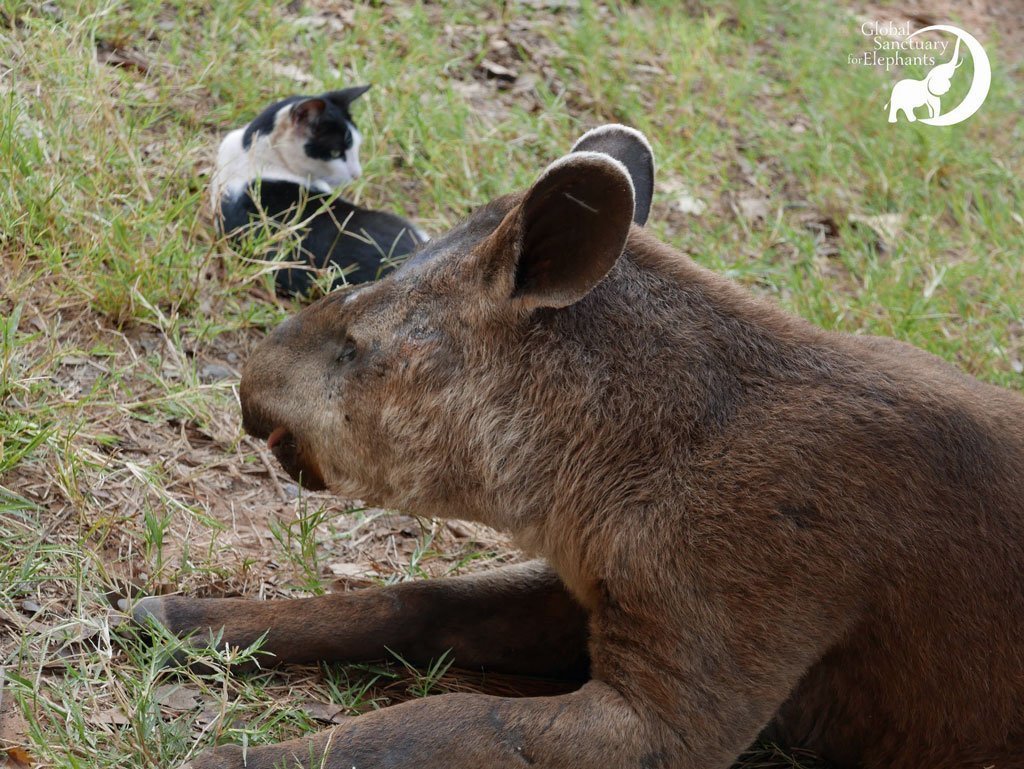 We wanted to do an update on Alma. But before we get started, for those who don’t know, Alma is an unreleasable tapir that was brought to us for rehabilitation and release. She is not releasable because she is blind and has seizure episodes (we believe due to being hit by a car). If she was releasable, we wouldn’t allow our cats into her yard. Big cats are their only natural predator and you wouldn’t want them to get comfortable with any feline smell. There are many photos out there of wildlife with dogs and other animals that aren’t appropriate- so we want to make this very clear. As someone who did wildlife rehabilitation for years before working with elephants, it’s very important. Wildlife are not pets.

With that out of the way, Alma was hanging out with our cat Bodhi this afternoon. He thinks everyone should be his friend. Alma is doing ok. She had a couple of episodes last week after going weeks without any. This is usually what happens, although we can’t find correlation to moon cycle or anything else at this point (and yes, we keep a seizure diary

) One of the last episodes was the closest she has ever come to a ‘typical’ seizure, but still not quite. The biggest concern with her is that, due to her strong flight response as a wild animal, she runs in a panic when they happen and because she is blind she frequently bangs up her head.

During this last episode we were able to get a blood sample from her and all of her tests came back normal- which is generally the case with seizures. Needing to find a way forward, we had to rule out some tick diseases and make sure her organs were ok for medication. So now Alma is possibly the only tapir in the world that is on anti-seizure medication.

We just started her a few days ago and she is doing well. A little extra sleepy and needs a minute to find her center when she first stands up, but this is very typical for the first two weeks of starting any animal on this type of medication. Because her episodes aren’t frequent, we are starting her on a low dose to see if that can eliminate them all together.

For those of you wondering where Ian is, he’s there, just on the other side of the corral.

READ MORE ABOUT ALMA AND THE OTHER SANCTUARY TAPIRS:

For more posts on the tapirs at the sanctuary, click on the “tapirs” gray tag button below.

Your ticket for the: Update On Alma, The Tapir

Update On Alma, The Tapir