Maia and Rana – To Play or Not to Play 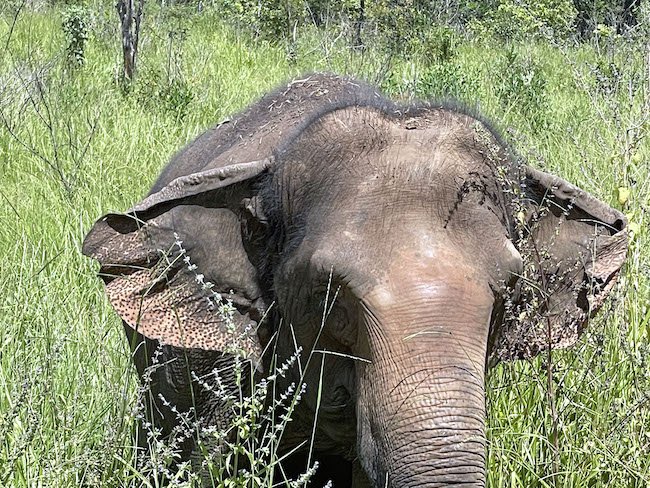 There are times we find Rana close to the barn without Mara and Bambi around. Most often it’s to clean up scraps the other two have left behind. One recent morning, when she was near the barn, Maia was nearby as well. While Maia has been sharing space with the three at a distance, she still seems to be insecure around them.

Maia and Rana have known each other for years and have a relationship, so we decided to offer the two of them some one-on-one time. We wanted to provide Maia with the chance to interact a little more comfortably with another elephant if she wanted (and with an old friend).

Initially Maia was a little hesitant to approach, but then walked over realizing it was Rana and there didn’t seem to be any other elephants around. The two stood together for a while, side by side, smelling and gently touching. After a bit, Maia’s demeanor changed and she got a little spunky, but in a way that Rana didn’t seem in the mood for. Maia started nudging Rana, trying to get Rana to react towards her. Maia’s actions weren’t aggressive, but Rana was in her quiet morning mode and didn’t want to play. After a minute of no response, Maia then went behind Rana and bumped her butt a few times, which caused Rana to walk away. The movement was enough to have Maia go into a much sillier mode, head down, lifting her back feet, and kicking out behind her. Although Rana was trying to communicate she wasn’t in the mood, Maia wasn’t listening. At this point, we decided to give Rana a break and see if Maia would walk off a bit. Rana wasn’t being hurt, but she also wasn’t being acknowledged by Maia, who is much stronger and agile than Rana. Part of our role in elephant recovery is walking that line – we need to create opportunities for Maia to have time with other elephants, but we also have to respect Rana’s desires. Rana’s age and physical health should be taken into consideration in situations like this, to let her know that we are listening and she is heard and safe.

This type of interaction is something that would happen between Maia and Guida occasionally.  Guida would take a moment to decide whether she wanted to engage in play, or if it was too over the top, and she might prefer to walk away. Maia can get a little physical during play, often due to excitement and joy she experiences with friends. Because she is a bit of a tank, and our youngest resident, we try to ensure she takes care in these situations.

Maia and Rana’s time together was still positive, even though Maia got a little caught up in the moment. At no time did Rana appear frightened and Maia was fine with being led off to have a snack and take the energy down a touch. It was actually sweet to see how excited Maia was, but she still needs to work on recognizing boundaries.  After decades alone, most elephants need to learn how to do this, and also learn when and how to express their emotions. As with everything in life, there is a time and a place. There will be plenty of opportunities to allow Maia more Rana time, and hopefully next time she will be more open to what Rana wants as well.

Your ticket for the: Maia and Rana – To Play or Not to Play

Maia and Rana – To Play or Not to Play