Are Elephant Families Like Human Families? (and some Big Payback news) 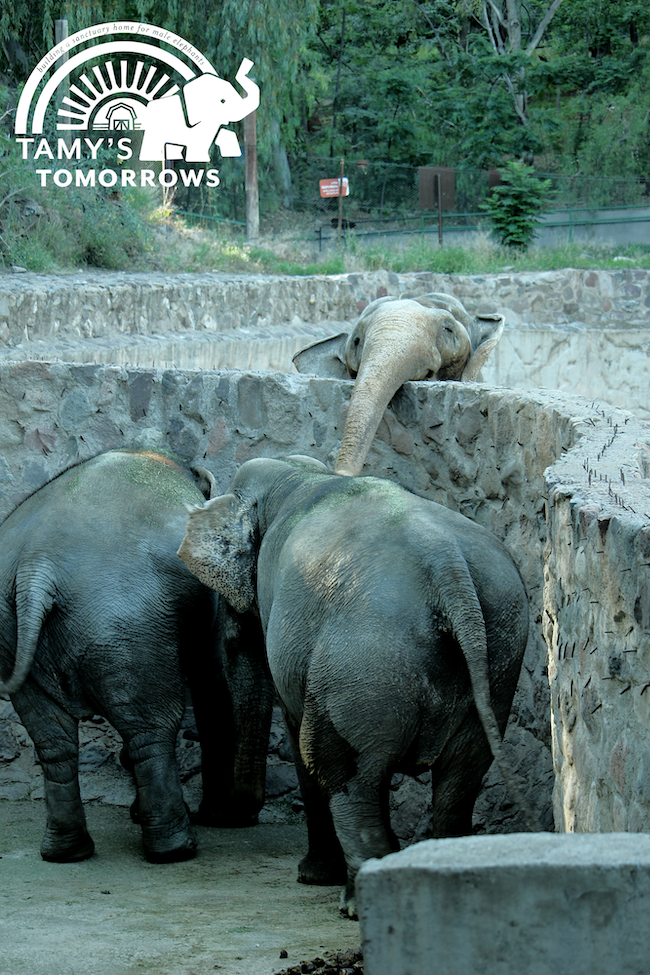 With Tamy’s fundraiser via The Big Payback less than a week away (May 5th – 6th), we’ve received a number of questions about Tamy – many about his relationship with Pocha and Guillermina, why he can’t be in the same enclosure with them now, and why they likely won’t spend much time together at Elephant Sanctuary Brazil.

Before answering, we have an exciting announcement. A very generous donor has offered a $50,000 match to go towards Tamy’s campaign! This is the largest donation match we have ever had and we are thrilled that each of our donors will have the opportunity to double your gifts, while bringing Tamy closer to sanctuary. Together we can do this.

Now back to the question. Elephant families are not built on a “nuclear family” structure, as human families can be. Male and female elephants do not raise their children together; rather, in the wild, baby elephants are raised in matriarchal female groups. Young males generally leave the herd approximately between the ages of 11 and 16. In other words, a wild elephant “family” comprises all ladies and male babies. Adult male elephants generally spend time with one another and do not play a role in raising and caring for their young. It would be inappropriate and likely damaging to separate a mother and daughter, like Pocha and Guillermina, because it is natural for them to be together for life. The same does not apply to fathers like Tamy.

In the case of Tamy, Pocha, and Guillermina – while Tamy is Guillermina’s biological father, he may not see her as a daughter, in the way a human would. To him, she is likely viewed more as a female elephant of breeding age and he would possibly attempt to breed with her, given the opportunity. We do not encourage any attempts to breed within a sanctuary environment, particularly in this case.

When he arrives at sanctuary, Tamy will know that Pocha and Guillermina are there, which will likely bring him some comfort in a new environment. He will be able to smell them and, potentially, be able to see them – in time and if that is what they desire. However, we don’t know how any of the three elephants will respond to their new lives at sanctuary. Pocha and Guillermina will be learning how to find their places in a herd of five other female Asian elephants. We don’t know how their relationship will evolve nor where they will choose to explore.

All three of these elephants coming from Mendoza will experience a world unlike what they have known for many years. This is a time for them to feel free to experience the joys of sanctuary on their terms, without added human pressures or expectations.

Each elephant that arrives from the ecoparque is offered choice for the first time in decades or, in Guillermina’s case, ever. The sanctuary is designed to offer protection as well as autonomy; the same experience will be offered to Tamy and the male elephants as is available to the females. When construction is complete, there will be a corridor connecting the male and female Asian elephant areas. If the females chose, whether that be Pocha and Guillermina, or any of the other 5, they will be able to explore habitats that adjoin Tamy’s. Although males are not a daily presence in wild herds, they are highly social and we imagine that he will appreciate the companionship and social opportunities.

All of this is a bit complex, but rest assured that the emotional and physical wellbeing of each resident is paramount. We will be sharing more information soon on the arrangement of the Asian male and female habitats, so that everyone can have a good idea of what it will look like for all of our residents and the potential that might be there for relationships to build.

Your ticket for the: Are Elephant Families Like Human Families? (and some Big Payback news)

Are Elephant Families Like Human Families? (and some Big Payback news)