Bambi Protects Us From “Scary” Tapirs 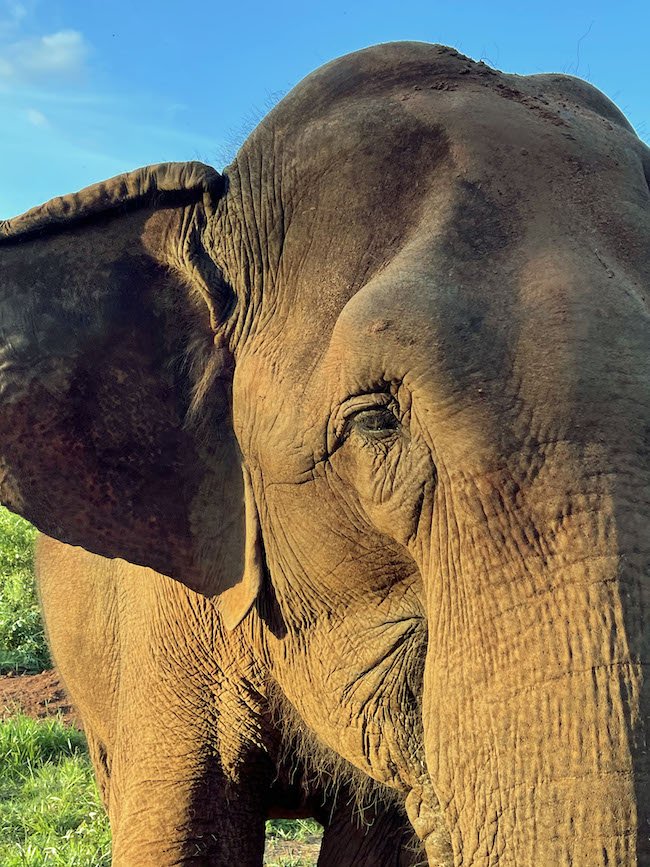 Some days, Mara, Bambi, and Rana have begun showing up closer to the barn in the later afternoon, instead of 10 pm. We changed up their feeding schedule recently and they have adapted well. We hoped that by adjusting their routine, they would stay out in the habitat, during a time that elephants often graze more, as opposed to relying on what they can get from us at the barn. The three are more active at night and have indeed begun to forage more and get that critical part of their diet that only nature can provide.

Tapirs are nocturnal and crepuscular (more active at twilight), so this is also the time of day when the tapirs wake up and start their “days.” Our former rehabilitation and release tapir, George, usually appears near the barn at dusk, in search of scraps. Sassy, another tapir from our rehab program, also regularly pops up in the vicinity, but not as frequently as George.

After decades in sterile enclosures, newer elephants are sometimes startled by other wildlife, even birds. They usually quickly settle down and learn to coexist with all living beings that call the sanctuary home.

Despite being here for over six months, Bambi still feels the need to protect her world from tapirs. Now that she has been near the barn when George is around, we can hear – and see – her react to him at times..

Twice we have seen her run at him full speed and hit the gate with her trunk. Hitting the fences doesn’t make much noise, but the gates rattle quite loudly when shaken or hit, so she uses that to her advantage. She also adds lots of vocalizing to the ruckus, making things extra dramatic. Rana and Mara just go about their business – as does George. Tapirs eat abandoned scraps from the elephants’ dinner, but they don’t approach the elephants while eating.

Another day, we heard a loud commotion from the house at dusk, and we turned on the cameras to check on the girls. We saw Bambi staring at something in the bushes; then she started walking back as if the thing in the bush was scary. Seconds later, a tapir ran by, so Bambi ran after it. That time, sweet Rana provided backup for Bambi, in case it was necessary. So, needless to say, we are fully protected should any terrifying, strange tapirs arrive.

Your ticket for the: Bambi Protects Us From “Scary” Tapirs

Bambi Protects Us From “Scary” Tapirs