Healing Is a Long Process 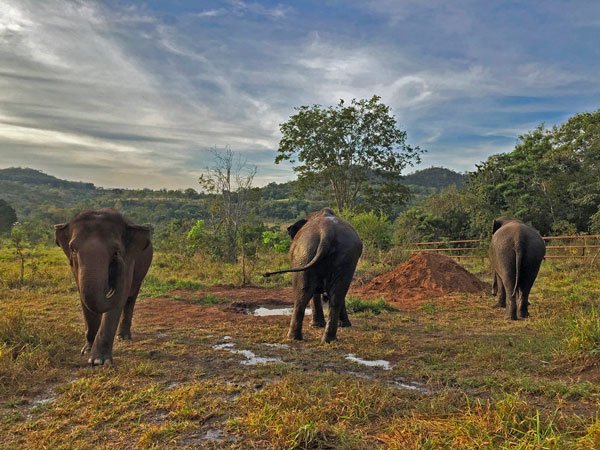 Some of you may have noticed that Maia was missing from the video yesterday. Don’t worry; it’s a good thing.

At the sanctuary, some healing and growth are immediate, while other processes are ongoing. Maia changed overnight when she arrived at Elephant Sanctuary Brazil, as did her relationship with Guida. Once built on aggression, they talked things through literally overnight (we slept at the barn- they chatted all night) and left the barn the next morning as friends. Guida taught Maia that if she wanted a friend, she needed to be willing to evolve, and Maia did. Because of it, she was rewarded with a friendship that changed all of us.

Since Guida’s passing, Maia has not become close with another elephant. She is friendly, will interact with them, and spend time with them, but she hasn’t connected the same way with anyone else. Something we haven’t seen from her since is a willingness to adjust to another elephant’s needs. Maia isn’t aggressive, but her energy is immense, she moves quickly at times, and her presence can be a little much for some elephants. If we hadn’t seen her make this exact adjustment for Guida, you could think it was possible she doesn’t realize, but her past actions have shown that she does.

In the past couple of weeks, we have noticed a shift in Maia’s behavior. The other day, she came over by where we were doing treatment with Lady. A fence separated the two, but there were three buckets of treats, hay, and palms. This would usually cause Maia to beg, or put her trunk up over the fence, but instead, she walked over to the tree that was right there and began grazing in the shade. Lady’s eyes showed that she saw Maia’s arrival. Still, she didn’t break stride in anything she was doing; she remained completely relaxed. Because of both of their behavior, when Lady was done, we put down hay for them close together. They spent a couple of hours tranquil, eating and grazing.

When these things happen, you never know if it’s a one-time deal or not, and we always try to squash any expectations of our own. Later in the week, we saw something similar with her and Mara and Rana. We were doing treatment with Rana, as Mara stood close by, and Maia began to come over (they were in the same yard). Rana was done with her treatment, so we decided to do Maia so that she could have a turn. Rana and Mara stayed about 10 yards away, eating hay and watching. When everyone was done, they all stayed at their piles of goodies, calmly eating. At other points, Maia would have been happy to help herself to someone else’s hay and treats, but she stayed with her own, and they all spent a couple of hours close to each other.

Another few days later, as you saw in the video yesterday, we brought out the water tanker to the girls, to empty the tank in a fun way. Rana and Mara were there, getting silly, and Maia started to come up the fence line in their direction. The girls clearly noticed her, and once they did, Maia shifted direction. She walked perpendicular to the fence, waiting until the tanker was empty and the energy level had subsided before she came over. Now some may think it’s sad that she didn’t want to play with them, but what she seems to be doing is recognizing that waiting is better for everyone. In that heightened excitement, Mara and Rana may have left, but since Maia waited, they stayed, and again, they all spent a few hours together.

Because of this conscious shift in Maia’s behavior, we decided to allow her to share space with Mara and Rana overnight. We always intended to do this, but we were waiting to see all three of the ladies appear more settled in each other’s company. It was a shift both Scott and I recognized individually and thought Maia had made it clear that she was ready to try. We can hear the girls vocalize during the night because of where our house is situated, and Mara is definitely not a quiet girl. It was a pleasantly calm and uneventful evening. In the morning, the three were in a different part of the habitat than the night before, but still very close to each other. With access to both large yards, they could have walked far away from each other, but they chose to remain close.

They have now spent a few nights sharing the habitat and will continue to do so as long as all three elephants remain comfortable. We will alternate Lady into the mix, allowing her to share a large yard with Mara and Rana while Maia is in the other. Lady is not yet at a place where we feel she would be ok with sharing a yard with Maia. Mostly because we still believe Maia would walk right up to Lady, and Lady hasn’t shown she’s ready for that quite yet. And with elephants like Lady, pushing too far, too fast can put her numerous steps back in her progress.

It may sound silly when we say we are proud of Maia, but we are. But we’re also happy that her being willing to change shows that she may be ready for more, which is good for her heart. Healing is a long process, and Guida was an enormous loss for her. And although she’s not ready for a ‘best friend’ at this point, she is working on opening her heart up a bit to the other elephants around her.

Your ticket for the: Healing Is a Long Process

Healing Is a Long Process