Update From Suz On Our Lovely Pelusa 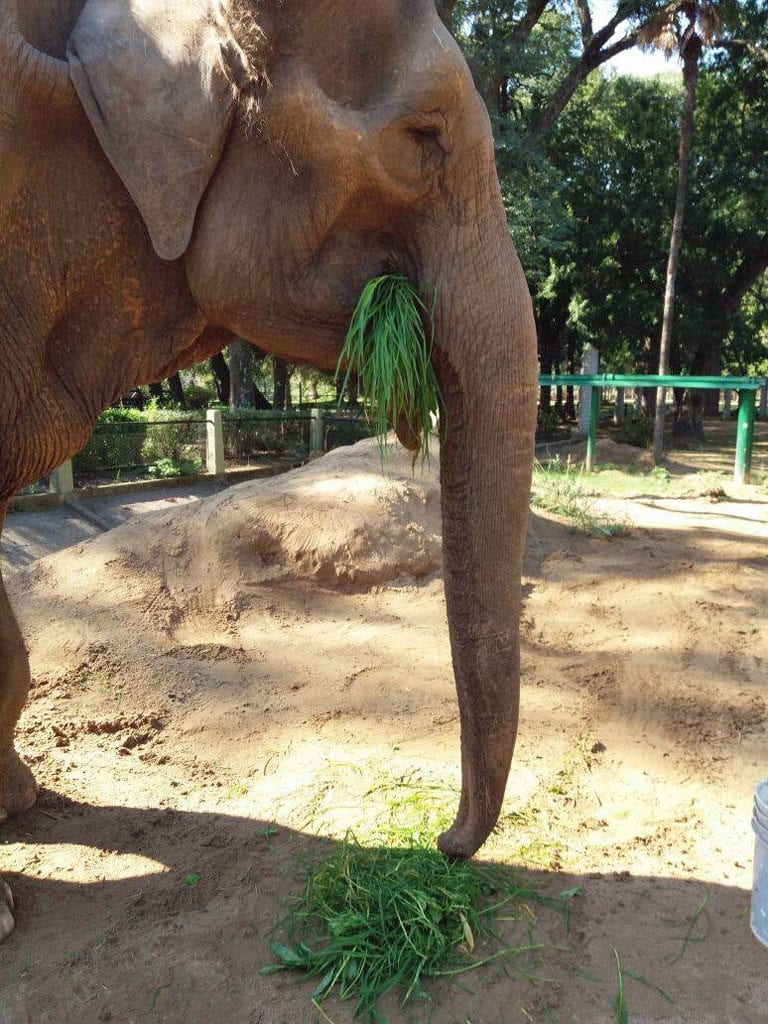 Yesterday’s fundraiser for Pelusa’s jacuzzi and medical care was amazing and we will post the totals once the Big PayBack hands out the bonuses. In the meantime, a cute update from Suz on our lovely Pelusa.

“I was super excited to hear the good news of the successful fundraising yesterday – it was chilly and rainy here, definitely the perfect weather for me to want to dip in a jacuzzi (ha!), and I wanted Pelusa to share in the excitement ofyesterday’s success, so I decided to buy her a celebratory pineapple.
Last night, on my way home, I swung by a little produce stand I frequent run by an older, petite woman who is endlessly entertained by my (lack of) Spanish and enthusiasm for produce (she doesn’t know it’s for an elephant, so I’m a bit of an enigma for her). While I was there, I saw she had a new delivery of the most perfect looking pears – I didn’t know how Pelusa felt about pears so I bought two – I figured if she didn’t like the first one I would eat the second one with my lunch.

Early this morning, as she enjoyed her morning hay, I tossed her one of the pears. She smelled vaguely towards it in her classic “is this actually worth moving my tired body for?” move and then she leaned in and swooped it up, put it in the front of her lip (her favorite spot for holding treasures). She then froze, and stood there, without moving a muscle for about 10-15 seconds, then her trunk went crazy – smelling in all directions. Within seconds, she had crossed several feet to stand next to her morning zoo keeper, who was cleaning her yard nearby. She started checking him all over with her trunk with an excitement I haven’t seen at all yet – not even for her favorite humans. He started laughing and I started laughing. He pointed at me and told her in Spanish that it was me, not him that threw it. She looked at me, she looked at him, and beelined for me.
Now, the past few days, everyone who sees her has been commenting, “oh, she is so fast now!” To me, she is still super slow, each step looking challenging, and I find it strange that anyone is calling her fast, much less multiple people, but, I also know she is moving faster than she did when I arrived.
However, this morning, as she moved from her zoo caregiver to me, she wasn’t “fast for Pelusa,” she was genuinely fast, and moved at a normal, real, true, healthy elephant speed – that is to say – super fast.

Even though she has been nothing but sweet and gentle since I arrived, I still keep my distance for many reasons – and even though her intentions where just to find out if I had more of this magic food (still in her lip, by the way, she hadn’t even bit it yet) – I quickly ducked back inside the barn. She stood there, with her body blocking all the ways into her enclosure just watching me and hoping for more pears.

Eventually, I had the zoo caregiver take her the morning oats mixed molasses and put it in the far corner of her yard so I could go back outside to help finish cleaning her yard. Even after he put it down – and she LOVES her molasses oats – she sill took another full minute with her trunk toward me and then towards her oats, deciding if she should continue waiting for more pears or go enjoy her oats. Eventually the oats won.

I’m really not sure if this is her feelings towards all pears ever or if – as they looked – these actually are the World’s Most Delicious Pears… or maybe both are true! To be honest, I’ll probably never know, because, knowing me, no matter how many pears I buy while I’m here, and no matter how many “an extra one for me” I buy, and even if her interest in pears wane, I am going to end up giving every single one to her, because seeing move at a normal speed towards me, her pain forgotten, focused only on pears was…the most perfect thing I’ve seen… until I see her get in that jacuzzi maybe

The photo is Pelu from a few days ago eating some of her fresh grass, which she only likes for the first 6-8 hours after it is cut. Moments like the one Suz wrote about almost never come with photos. They aren’t staged and we never expect those reactions, but when they do happen, they are joyous and we remain present with them in those moments, never giving thought to walking away to get a camera. We hope you understand.

Your ticket for the: Update From Suz On Our Lovely Pelusa

Update From Suz On Our Lovely Pelusa