Maia is Distracted By Her Love of Snacks 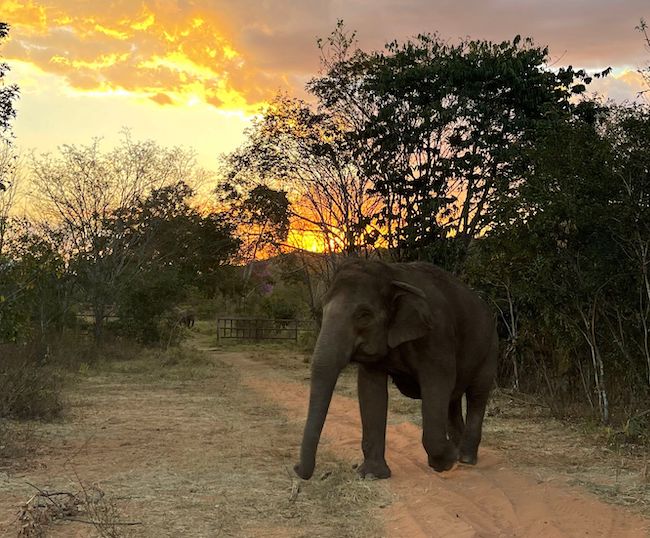 The elephants have an excellent sense of time, particularly when it comes to food. Recently, we were a bit tardy getting their late night snack put out in the habitat, so Mara, Bambi, and Rana made their way down toward the barn to see what the holdup was. The three were not actually at the barn, but were around a little bend nearby. As Kat went to put out the evening produce and hay, she could see Maia also coming toward the barn from another direction – all smiles and thrilled to see Kat putting out food. Maia clearly thought she was going to enjoy Mara’s late night snack all by herself – but Kat let her know that the others were standing right around the corner.

Knowing Maia was still coming her way, Kat again lightly warned her that Mara, Bambi, and Rana were very close by. Maia kept happily taking big steps toward the produce being laid out,  but stopped immediately when she saw the others. She looked at them, eyes wide, and she didn’t move. Of course, the other three didn’t make much of an acknowledgement of her; they were busy focusing on their own food.

Maia hung out in that spot for a minute. Kat wanted to wait and see what Maia was going to do now that she was in this unexpected situation. There is no reason to be particularly protective of Maia, because she can handle herself around the other elephants and the others have never displayed any aggressive behaviors toward her. It wouldn’t help with socialization and emotional growth if caregivers were to rush an elephant’s way because she seemed uncomfortable. Rather, that elephant has to figure out what she wants to do on her own.

At that point, Maia was only about 10 yards away from the others and could have walked right up to them if she wanted to. She ultimately didn’t join them, but she also didn’t leave. After she relaxed a bit, Kat went back into the habitat on the 4-wheeler and Maia followed. After leaving food for the others, Kat also left a bit of food for Maia, so that she wouldn’t eat the treats that had been placed out for the rest of the elephants. So Maia still got some after-dinner extras and she also spent a few moments around Mara, Bambi, and Rana. It was a small step and showed that Maia continues to grow in her comfort in sharing spaces with other elephants.

Your ticket for the: Maia is Distracted By Her Love of Snacks

Maia is Distracted By Her Love of Snacks