Leaving His Mark on Our Hearts 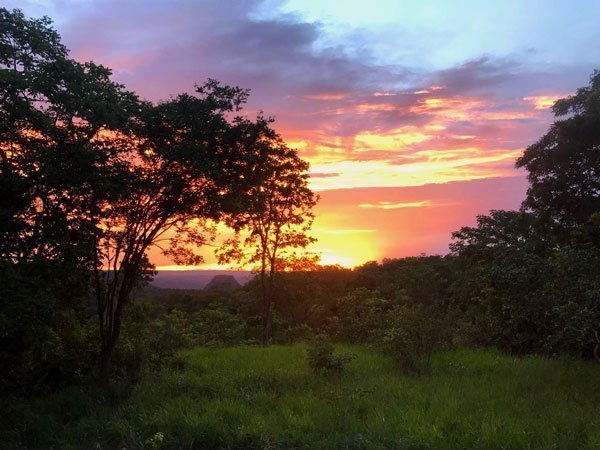 I am sorry to say that Dot passed away last night. He had some struggles over the past few months. After a battle with a mysterious virus, he had mobility issues. We built him a wheelchair, which seemed to help build strength back in his legs, and he looked better. After a bit, you could tell he was getting a little depressed, so we allowed him more time outside, some of it out of his wheelchair, and once again everything improved, but he still wasn’t healing the way he should. The conversation took the hard turn to euthanasia, and the next day, he stood up on his own for the first time. We took the hint and tried to figure out a different way forward. We began discussions with a vet 3 hours away about amputation of the lower portion of one of his legs. There was a chance it wouldn’t solve everything, but it seemed like his best chance.
At night feed, Scott and I switched roles; I went down to feed the girls while he stayed up and took care of everyone up here. While he was finishing something else, he got a bad feeling and went to check on Dot. Dot was on his side, pupils dilated. As I drove up from feeding the girls, feeling light because of how wonderful it is to be around them, I saw Scott holding Dot, and it was apparent something was very wrong. He was dying. Since all was peaceful, we wrapped him up, gave him some transition essential oils, took him to the West side of the porch, and watched his last sunset. It was quiet, full of pinks and small fluffy clouds that moved from the light into the darkness. He watched the light fade, looking up at me from time to time as if to make sure I was still with him.
Some people may wonder why we didn’t euthanize him at that moment, and it was simply because he wasn’t struggling, it was peaceful, so we allowed him to finish his journey on his own. People who work in hospice often say that there is so much that goes on physically and emotionally in those last days and moments and that death can be a beautiful process. In my 15 years of veterinary work, I have euthanized many animals, including my own, it is not a process we are uncomfortable with. During that time, sometimes euthanasia was done later than it should have been, other times too soon, the decision always being a struggle as to what was the perfect time. Sadly, there is no such thing. We do what we feel is best, and that is all we can offer. We have seen the beauty in that process, many times it includes tears and our own personal pain, but that doesn’t take anything away from the bigger picture.
Bundled up, we went inside. You could feel Dot’s breaths becoming more shallow, his body becoming more relaxed, and then there was a seeming realization that there was no turning back. He took a big deep breath, stretched his legs, and then nothing more. Just like that, his spirit left its shell and went on its way, leaving his mark on our hearts, as they all do.
And if you have made it to this point, thank you, and so you know, Dot is a rooster. I left that out intentionally because sometimes people don’t think much of chickens. But we sincerely mean it when we say sanctuary for all. And I wanted him, even if just for a moment, to feel the same love from others that many animals here receive. He wasn’t a ‘perfect’ boy; he ended up at our house because of his ‘bad’ behavior. This tough rooster turned into a total momma’s boy when he arrived, seeking out solace from the human in his life until he found his place amongst the others. I won’t lie, he was our worst chicken patient ever, much worse than those with far more severe injuries. But part of love is acknowledging all of someone, not making excuses for them, and accepting and loving them anyway. Sometimes even appreciating what others would never. Like all of our other animal companions, he was perfectly imperfect.
Especially for me, the chickens end up being a source of joy and solace. When spending hours at a computer, it can be hard to find something that genuinely makes you smile. But all it takes is spending five minutes outside, watching them play, dust, having someone come over to be held and pet while they nap, seeing the cute babies running around after their moms and being blown away at how phenomenally dedicated and tolerant their moms are. They are my breath of fresh air, they keep me balanced, and they help me remain emotionally open to them, the elephants and the humans in my life. So please, even if you aren’t someone who necessarily has a soft spot for chickens, in particular, give Dot a moment of love, sympathy, respect, whatever you can spare. Because he too deserves it.

Your ticket for the: Leaving His Mark on Our Hearts

Leaving His Mark on Our Hearts