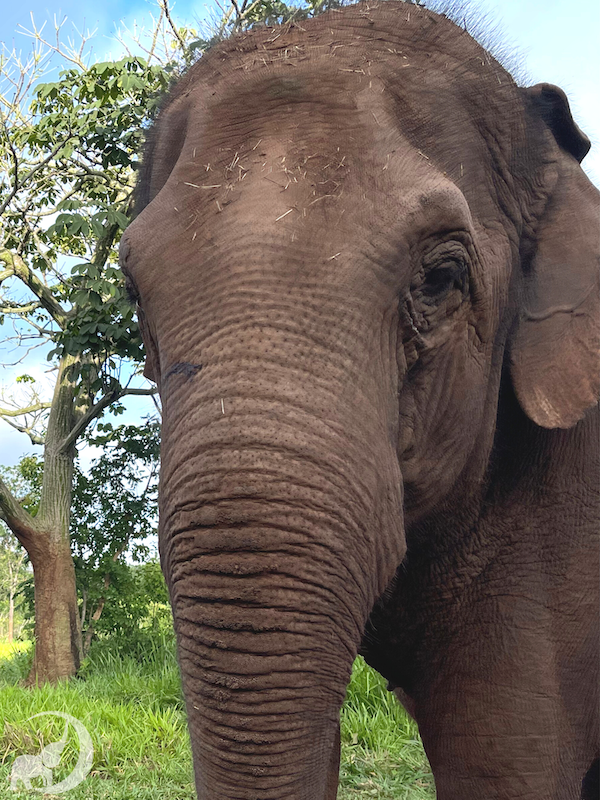 As Scott mentioned in an earlier post, Guille is still working on having an emotionally open and honest relationship with her caregivers. There seems to be a veil that is blocking the emotional element of trust that we know will take time to pull back. That became evident in a recent training session with Scott and Mateus.

Initially, Scott was working on Guille’s feet and she was doing incredibly well. As we’ve explained before, we like to have someone hold an elephant’s trunk during treatment because it creates a sense of intimacy and allows the caregiver to get – through any tension or movement in the trunk – a sense of any stress or anxiety, or even relaxation.

While Scott was doing some foot trimming, Mateus came over to hold Guille’s nose. Because Guille was being so calm, Scott decided to give Mateus the opportunity to trim her feet. As Mateus is still learning, he is very gentle in his approach. But once he started, Guille immediately leaned her head into the fence to show she was not happy with the new arrangement. Scott explained to her that they were doing the same thing as before and the two tried again, but Guille was not interested. Scott tried to resume trimming himself and Guille was still not fully settled. Since, when Guille normally doesn’t want to participate, she walks away, Scott decided to give her some time to decide what she wanted to do. She continued to be engaging, so he asked her to do a couple of other behaviors, which she responded to very quickly, and then they tried to work on her feet again. Mateus came over to hold her nose and she was back to being ‘perfect’. Ultimately, they were able to finish the area they had started and end the session in a good place.

This is just one example of how Guillermina is quick to lose trust in others and how small changes in new routines can still feel significant to her. For instance, though she has had bloodwork done multiple times and will position herself perfectly, when it comes time for the needle stick, sometimes she turns around quickly, as if to say: What did you just do? Then she’ll settle back in easily. Though she has never experienced any dominance-based training, she sometimes responds to situations in a way that physically abused elephants do. Though the facility where she and Pocha lived was psychologically damaging, there was not any intentional physical harm done to them. And yet, she still has a hard time taking that next big step with her human caregivers.

Guille is still in the early days of her sanctuary life and has a lot to work through and figure out. Right now, we’re just happy that she is doing amazingly well and focusing her time and attention on improving her relationships with the other elephants. The rest will come in due time.

Your ticket for the: Guille Continues to Build Trust