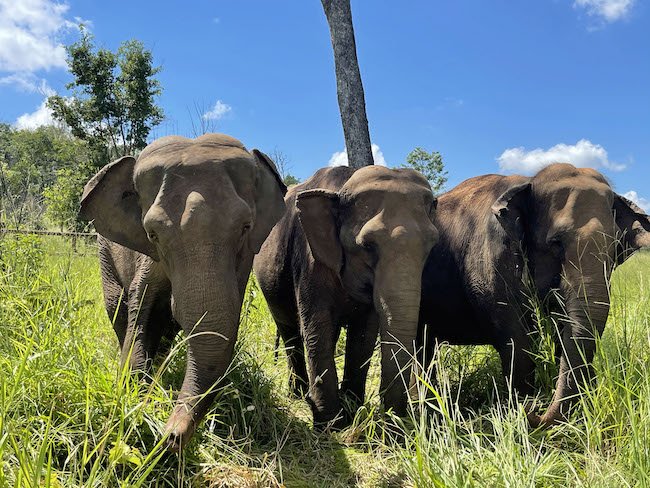 At the sanctuary, there is never a shortage of projects (and side projects) in the works. One of the many items on our to-do list has been building a treatment area off of Yard 4.

The elephants have made it evident how much they enjoy one specific section of Yard 4 near a mud wallow, the pond, and the trough. It seems to be a favorite spot for everyone, so we are adding an elephant care area there. It will have two treatment chutes, a foot soak area, and a center stall. Eventually, we plan to expand the Asian habitat, and this area will join Yard 4 to the expansion. With the contracted team working on fences for the African habitat, you can usually find our staff working on the new treatment area or on the elephant kitchen.

Recently, one of the contractors working on Kenya’s fencing ended up working on a Saturday. Since the contracted team doesn’t work weekends, he joined our maintenance team for the day, which meant he worked on the treatment area. Since he usually works in the African habitat, he typically isn’t anywhere near the elephants – but he ended up having lots of unexpected elephant time on his extra day.

Many elephants like loud machinery, or at least respond strongly to it. Since the team was working in an area the elephants already like, Mara, Rana, and Bambi were not going to miss out on the “human show.” As non-caregiving staff, the maintenance team maintains a decent distance from the elephants. Despite that distance, we like to observe the elephants when others are nearby. That way, if we see the elephants become overly excited or agitated, we can direct the team elsewhere, giving the elephants space. Scott ultimately spent the day working out there and watching the girls. They did well. Scott put food out for the girls in other places, but sanctuary provides elephants with autonomy – and Bambi and Mara used their autonomy to return repeatedly to watch the humans build.

Bambi mostly seemed curious. Mara is a bit spoiled these days because she received a great deal of attention when she was being encouraged to eat during her recent bouts of gastrointestinal issues. From this, she feels like humans mostly exist to serve her. She seemed a little displeased by Scott not continually feeding her, but took it in stride. Rana had perhaps the best time of all – not watching the workers, but by eating all the food Mara and Bambi left behind when returning to people watching. Once she ate what she wanted, she would go back to her friends and the people show.

Your ticket for the: Bambi, Mara, and Rana – the Nosy Neighbors