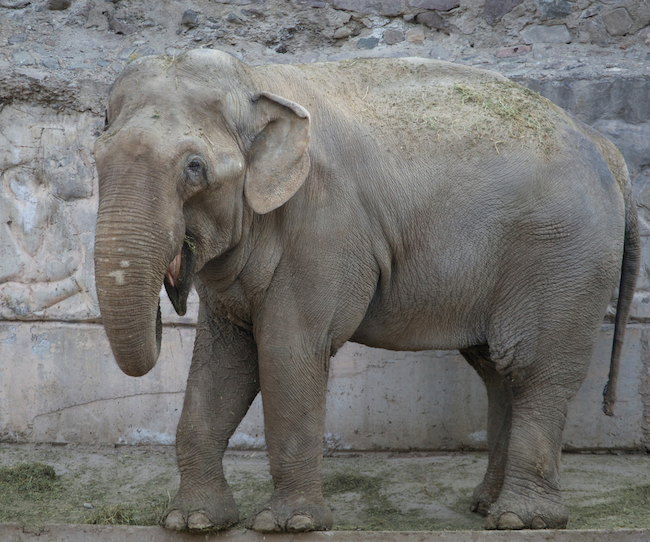 We’re back this Friday with more EleFACTs about male elephants. Have you heard of musth? This annual hormonal cycle naturally occurs in adult bull elephants and can last anywhere from a few days to as long as several months. Physical and behavioral changes are characterized by secretion of a hormone-rich substance, temporin, from facial glands, possible aggressive behavior, and a steady trickle of urine down the bull’s back legs. Two separate studies by M.R. Jainudeen and Dr. Joyce Poole, studying Asian and African elephants, respectively, suggest that testosterone levels increase up to 50 times higher than normal, leading to the potential for heightened levels of aggression.

For elephants in captivity, this period in their lives can be difficult. Asian male elephants can weigh up to 15,000 pounds (6,810 kg), and any behavioral changes during this time could make them dangerous to themselves, other bulls, and female elephants. It takes an extreme level of care and knowledge to properly care for elephants in musth. Even bulls who are normally docile can exhibit behaviors that are abnormally aggressive, made even more dangerous by unsafe or improper confinements. These totally normal behaviors often make males a target of abuse, mistreatment, and neglect in captivity.

Providing sanctuary to male elephants offers them the benefit of having the space and freedom to release the pent-up levels of energy, anger, or frustration that may develop during musth. The open space allows them to roam on their own and release their feelings by knocking over a tree, fighting with a boulder, or splashing in a pond rather than taking them out on other elephants or even human keepers. In sanctuary, we can furnish an appropriate environment for these bull elephants to naturally express their feelings and reactions to the biological changes in their bodies, rather than suppress them and cause further damage to themselves or others.