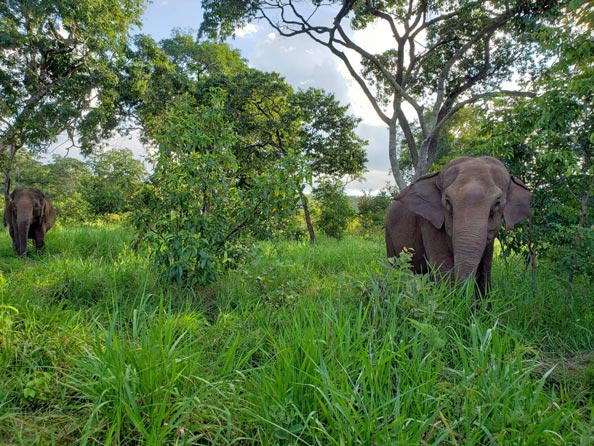 This photo shows the reality of the other 2 pictures we posted over the past couple of days. Maia and Guida are pretty close, just enough distance where they are much less likely to bother the other for their food. But when the photo is pulled back this much, you don’t see the details that are such a big part of who they are- their smiles, their eyes, the relaxation, the cheeky.

Many times we’ll choose to use the closer shots because they are the ones most people seem to resonate more with and that allow people to feel closer to the girls. But sometimes people ask how come the girls are alone so often. Most of the time they’re not, it’s just that the photos don’t get as good of a response when they’re pulled back.

If the girls are close to the barn, it’s easier because food is not involved, they squish together a bit more, and we can get closer because of the protection of the fence. The reality of their day is that most of it is spent in the company of each other, away in the habitat, and we let them be. When we are out in their space, it’s generally with food, so we tend to create a bit of space between them, no matter which of the three elephants are there.

So….. just a little perspective to understand that just because a photo only shows one elephant, it doesn’t mean they’re alone. It simply means that the closer picture lets you see them more for who they are.

Your ticket for the: A Little Perspective