Ramba’s Journey From Circus to Sanctuary

For those who may not know Ramba’s story, we will share a bit of it leading up to the fundraiser starting November 21st, for her rescue to sanctuary. https://www.crowdrise.com/global-sanctuary-for-elephants/ 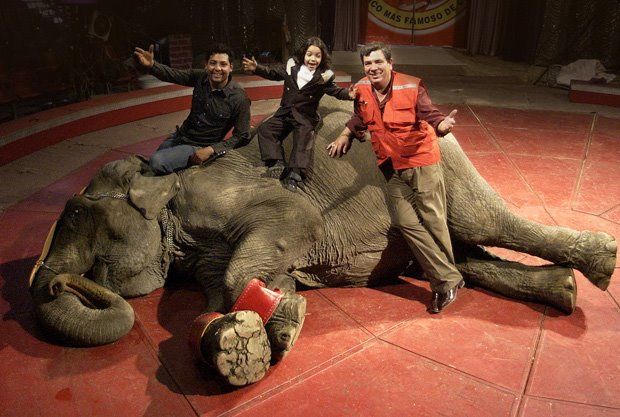 Ramba in the circus

Ramba is one of the easiest elephants we’ve ever met, but her life has been anything but. She was a circus elephant for over 3 decades. Most of that time was spent without the company of other elephants. For a brief time she had an elephant friend- but she passed away and Ramba was alone once more.

Years before we were involved, Ramba was confiscated from the circus due to abuse and neglect. Unfortunately, as we saw with Maia and Guida, there was nowhere for her to go. It was ruled she would stay on the property of the circus, but not be allowed to perform. Her little miracle ended up trapping her in a terrible fate once again.

Ecopolis (the NGO in Chile that fought for Ramba’s rescue and is still involved in her care) reached out to Scott when we were still at the sanctuary in Tennessee, but it wasn’t until years later that we met her for the first time.

Ecopolis continued for years to try get Ramba out of the circus, contacting us for plans for her relocation. Around Christmas 2011, after we had already left TN, they called and asked if we could get on a plane that afternoon and fly to Chile. They had someone who tried to move Ramba out of the circus twice and failed. The judge gave them one more attempt otherwise she would spend the rest of her life on the circus lot. Going by the plan that it would take about 10 days to get her acclimated to a crate and relocate her, the judge gave them 10 days from that moment. We weren’t even in Chile yet and the clock was ticking.

The next day we hopped on a plane and flew down to Chile, because of the holidays we had to wait a day to go and see her. Not surprisingly, her life was depressing. She lived on a small cement pad with access to a tiny, dark inside stall. Across the way from her were rows of cages filled with big cats. Her owners kept a close eye on our every move and made sure we understood we were not welcomed.

Trying to get her out would be far from ideal, we couldn’t put a crate into her enclosure and didn’t have anything secure to try and create a corridor to lead her out. There also wasn’t a transport trailer available, but luckily the people at Perrot were generous enough to let us cut holes in one of their cargo containers and had their workers set it up as best we could for an elephant move.

Four days down and she hadn’t even seen the trailer. Upon meeting her she seemed calm and controlled by those around her. We were hoping her life on the road would make it so that she was easy to load. This was her last shot……

– Aren’t you glad you know the ending to this? We can say, this was probably the craziest transport we have been involved in. Looking through the photos and videos for posts has been a trip. It’s easy to forget all of the horrific details.

This story isn’t short, but we wanted to share some details that none of our followers ever heard before, this way there is something for everyone. If you want the cliff notes, you can head to her page and read those

Your ticket for the: Ramba’s Journey From Circus to Sanctuary

Ramba’s Journey From Circus to Sanctuary