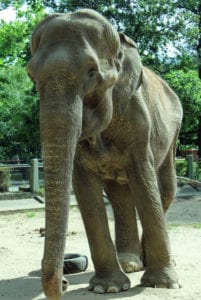 Pelusa Part II:  When Dr. Rinku Gohain and myself (Kat Blais, GSE Co-founder) arrived at the La Plata Zoo in December and walked out into the yard to see Pelusa both our hearts sank. We said nothing to each other, just quietly observed the stoic, sad figured who wore exhaustion all over her entire being. Many times with elephants, their physical appearance doesn’t determine the spirit inside. In this case, both were fading and it was heart wrenching.

Part of our job was to assess her ability to travel, but as a caregiver, the bigger part of my job is always much more nurturing than that- to care for her while there, support her and try and see her for her. The first day was spent trying to find the balance between doting over her while respecting the fact that she simply didn’t know me, she often doesn’t accept females and my care isn’t beneficial if she simply doesn’t want it. Because of this, most care is from a distance and are the basics: water, food, cleaning, extra snacks, quiet observation and an occasional statement of support and affection. Everything must be on her terms.

By the second day her spirit and appearance had improved. Her eyes were brighter, she was more active and responsive and she seemed more engaged with the world around her. It was at this point Rinku and I had the conversation about our initial thoughts. His that there was no way she could travel and him being one step away from wanting to put her on an IV and mine of disappointment knowing we couldn’t get her to sanctuary-she simply wouldn’t make it. Thankfully that changed for both of us as she began to shift in our presence.

The second day is when we began to see the inner strength that used to dominate her personality just a few years ago. She was struggling, but at that point, determined not to give up. This left us to believe that with intensive care that would help build up her strength, Pelusa could be able to travel to sanctuary and finally know the comfort only other elephants could provide. She could open herself up to the healing of sanctuary.

On top of her general overall poor condition, the biggest hurdle is her feet. They impact every one of her other struggles, and unfortunately, need a post of their own.

Pelusa Part I:  An Update

Pelusa Part IV:  Where Does That Leave Us Now