Pocha and Guillermina Lose Track Of Each Other 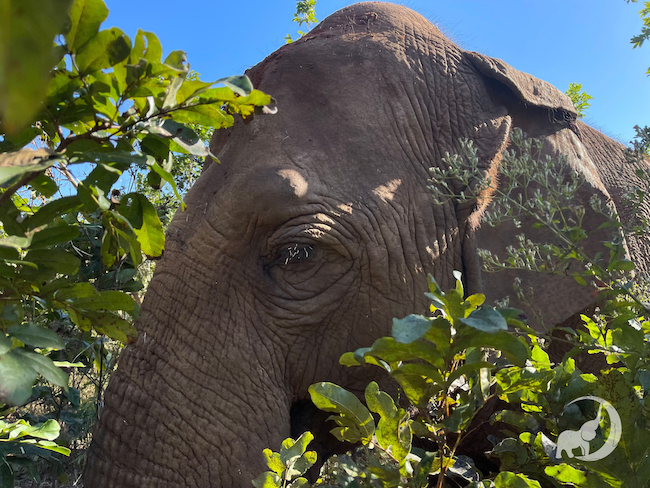 This week, Pocha and Guillermina lost sight of each other for more than just a moment, and it played out a bit like an elephant comedy. Both were spending time near Maia in Yard 4, when Pocha decided to go exploring. Guillermina was very content spending time with Maia, so Pocha seemed to feel safe taking a stroll. She may have wanted some time on her own, but also may not have realized exactly how much space she was putting between herself and Guille. After making her way through some bushes, Pocha found herself on the road – walking toward where Bambi, Mara, and Rana were hanging out.

She looked up and saw the other elephants – which is a positive thing, because it meant that she was looking up, rather than just a few feet in front of her. It seemed that she possibly thought that one of the “Powerpuff Girls” might be Guille, so she decided to check them out to be sure. She smelled each one, going down the line as if to say, “Are you my daughter?” to all of the ladies. But, she didn’t find Guillermina among the crowd. The three accepted her presence without too much fanfare, though Bambi did turn and face Pocha head-on with an excited greeting.

During this time, Kat thought she’d try to reunite mother and daughter, since clearly Pocha was looking, so she led Maia at a distance using the 4-wheeler, hoping that Guillermina would follow. Guille began to follow, then stopped. Maia continued on and met up with the other girls. Pocha had now moved on from her visit with the three and Kat didn’t see her; she was somewhere in the woods, taking a longer walk than she ever has. That’s wonderful, but now things were becoming a game of elephant hide and seek. Eventually Kat found Pocha by Lollipop Tree, and led her toward her daughter.

In the meantime, Mara had wandered over to where Guillermina was spending time and the two of them shared space. They touched and smelled one another and were gentle. It was lovely to see, since Mara is sometimes one of the least responsive of the group when it comes to meeting the new arrivals.

One important positive lesson from the whole silly experience was that Pocha didn’t seem stressed to be away from Guillermina, but was very curious about where she might be, and curious about the larger yards around her. Guille also seemed calm and appeared to be enjoying her time with Maia and Mara. Mother and daughter weren’t calling out to each other with their big trumpets or bellows, as they have done in the past when they’ve gotten briefly separated. After all of the excitement of spending time near the other elephants, the two had a rather uneventful reunion and headed back closer to the barn with Mara close behind.

Photo of Pocha in the bushes

Your ticket for the: Pocha and Guillermina Lose Track Of Each Other

Pocha and Guillermina Lose Track Of Each Other