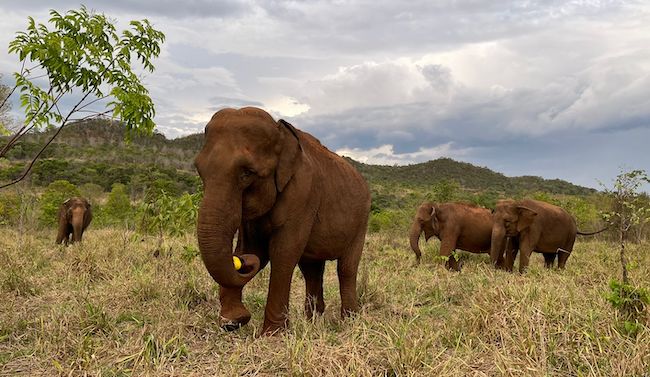 Maia continues to move even closer to Bambi, Mara, and Rana as the days go by. Over the past couple of months we have seen a general trend of Maia becoming more curious and gaining confidence around the others.

During a recent trip to put out some after-dinner snacks in the habitat, we saw Bambi, Mara, and Rana grazing as a group, as they often do, and Maia gently walking toward them. The three were very relaxed, so Maia perhaps felt comfortable inching near to watch them. The treats we’d put out may have been a bit of an incentive for Maia to stay in the vicinity, but even without that, she has continued to move closer and closer to the other three.

Rana and Bambi were at ease with Maia’s presence, but Mara eventually took her hay and walked with it into the bushes. The other two eventually followed Mara into the bushes, with Maia not too far away. Even though each of these moments with Maia and the three might seem small on their own, when put together, they represent a significant amount of bravery and acceptance for all involved.

Your ticket for the: Maia’s Elephant Baby Steps