You Ask, We Answer: Why Do Ongoing Training? 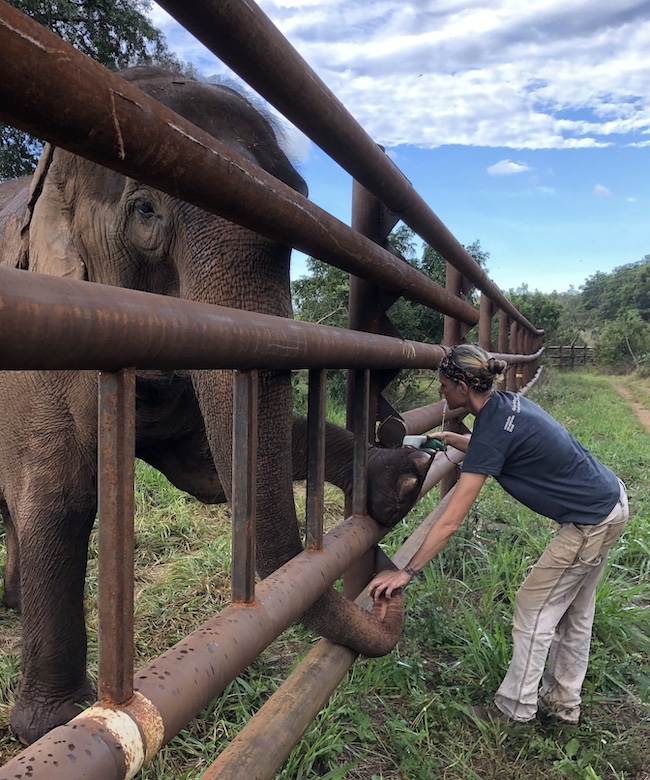 After a recent video showing a curious Lady watching one of Mara’s post-dinner training sessions, we had a few questions about why we continue training sessions with elephants after they have been here for quite some time. The answer is simple, but important: to provide essential medical care for them.

Our caregivers begin gentle, reward-based training shortly after each elephant’s arrival. We want the elephants to know that it is safe to do things like lean in, present their feet, and allow us to touch areas that might need care, like their face, ears, around the eyes, their belly, or their tail. There is a distinct difference between the methods most of our residents have been trained with in the past and our training style. When elephants have learned from a dominance-based trainer, they are taught to move away from a stimulus (being punished or hit). They learn to do whatever is asked of them in order to avoid that negative stimulus. We are essentially asking them to do the opposite: to do what they are asked while instead moving towards us, the target, and a positive reward – food. Mentally, this is the biggest hurdle that an elephant faces when learning behaviors via positive reinforcements. It can often take weeks for them to make a shift in mentality but, once they understand that concept, training becomes much easier.

Most of the elephants in South America are older, so the elephants currently at sanctuary need close health observation and, if they are not already dealing with a medical issue, are likely to in the near future. Because we do regular health evaluations on each elephant, their knowledge of what to present to us or how we will be examining them makes the experience more comfortable for them, and it moves things along fairly quickly. More importantly, if something does go wrong medically, the elephant is already familiar with the behaviors that will allow us to treat them in the most efficient and thoughtful ways possible. Eventually it becomes no big deal for them, and life is easier for everyone involved.

If we, as caregivers, waited until there was a problem to ask an elephant to move in a certain way, or to allow us to touch them in areas they are not used to being touched, then it is likely that the elephant would have only negative associations with those interactions. Waiting to train the elephants on these behaviors until there was a medical problem would mean delaying care and potentially causing more discomfort or trauma to the animal.

For instance, Lady’s recent eye poke healed quickly because Lady is used to treatments, the actions of leaning in and having her face touched, comfortable with her caregivers, and she knows she is going to be rewarded for letting us treat her. Additionally, it is easy to provide Mara with reinforcement training because she usually eats her dinner in the chute, so it’s convenient to follow up with some brief training exercises. She has a positive association with that place and a trust in her caregivers. Although Mara went through extensive PC training at the ecoparque and received foot care, there is often less motivation to participate with training at the sanctuary where there is more positive stimulation, like dynamic space and friends to engage with. Also for her, not only is our training technique tailored to her specifically, but the space is very different, allowing for more contact from both humans and elephants.

The training that we reinforce is very basic and just acts to remind the elephants of what to do, how we ask them to do things, and that they will be safe when in our care.

Photo of Lady presenting her foot to Kat

Your ticket for the: You Ask, We Answer: Why Do Ongoing Training?

You Ask, We Answer: Why Do Ongoing Training?