You Ask, We Answer: How Do Elephants React to Cold Weather? 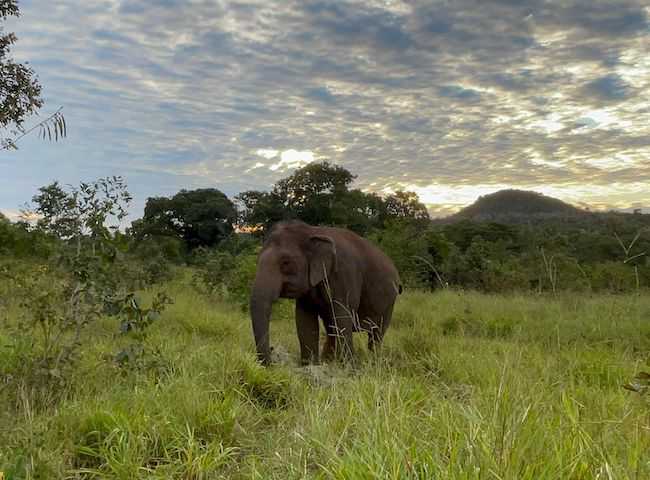 After a recent post about a change in temperature here in Brazil, we had several people ask questions about how elephants react to cooler weather, and what the sanctuary does to prepare for cold weather events. We thought we’d share a bit about what we’ve learned and how we would react in a scenario where long-term cold weather persisted.

Elephants are very individual as to their reactions to various temperatures; some thrive in cold weather, while others might get chilly faster. For instance, Rana, Maia, and Lady seem to like cooler temperatures (though we don’t do Lady’s foot soaks when it is chilly and overcast). Thinner elephants may get colder faster but, again, it is based on the individual. Technically, caregivers need to become concerned when temperatures reach 42 degrees F (6 degrees C) or below. That is when elephants may get frostbite on some of their more vulnerable areas.

In some parts of Asia where elephants live, it stays cold for months. The weather is not only wintry, but also rainy; Asia has many older elephants with compromised health, so they need to be able to keep the elephants warmer than we might here, as the climate stays warmer and it is almost never rainy and cold at the same time. Many elephants there have mahouts, or elephant keepers and riders, that stay with their elephant almost all the time. In those colder climates, and with constant supervision, it is possible to cover elephants with blankets. Ramba had a blanket in Chile, which she wore when it was very cold, but also enjoyed throwing it around more than wearing it.

Here, it does not get cold enough for the elephants to need blankets. Besides, when elephants have freedom of choice, they have the ability to push a blanket off almost immediately – where it can be a toy that is ripped into pieces or something that gets eaten.

On the coldest days here in Brazil, it may drop into the 50s F (10+ degrees C) in the evenings, and it almost never remains at that temperature for a full 48 hours. We estimate that happens perhaps ten times per year. In most situations, cooler temperatures last for about a day. The following day, the sun comes out and temperatures warm up significantly. Elephants store up heat in their core and, because a brisk day is generally preceded by a sunny day, they don’t get cold if there is a chilly evening. Elephants slowly release heat throughout the night and the entire next day. For that reason, they do not get particularly cold during the first chilly day. Should there be a second cool day, they may begin to get chilled, because the heat they have stored runs out. But the sun generally shines again on the second day, so the impact on their body temperature is minimal.

In order to receive accreditation from the Global Federation of Animal Sanctuaries (we are one of only 3 elephant sanctuaries in the world to be accredited), we must have a barn large enough to house our elephants and a source of artificial heat that can maintain a safe temperature, should the weather fall to a temperature unhealthy for elephants. We have the ability, if an elephant’s health becomes compromised, to make adjustments to the barn to accomplish this, but that has not been necessary, to date.

All in all, we have plenty of contingency plans in place in the event of cold weather that might negatively impact the elephants’ health. However, we don’t anticipate needing to employ those measures at this point.

Your ticket for the: You Ask, We Answer: How Do Elephants React to Cold Weather?

You Ask, We Answer: How Do Elephants React to Cold Weather?