The Worst Part of the Dry Season

We are deeply sorry for the radio silence, we are sure many of you have noticed. It has been a challenging few day but things are improving rapidly. Let me first say that Maia and Guida and all of the people and critters are doing exceptionally well.

Now that you can breathe a little easier… As many of you know we are nearing the worst part of the dry season. We did have a couple of small showers 2 weeks ago, causing everything to immediately sprout new leaves, with the anxious anticipation for the return of the rain season. However, this was short lived and the dry conditions rapidly returned. A farm owner, about 4 kilometers away from the boundary and over the mountain from the sanctuary, also became anxious for spring and set fire to an area that he had been clearing the forest for more pasture. Both, the clearing and setting fire during this time of the year are illegal activities. The fire immediately got out of control, fueled by strong winds and the dry vegetation. 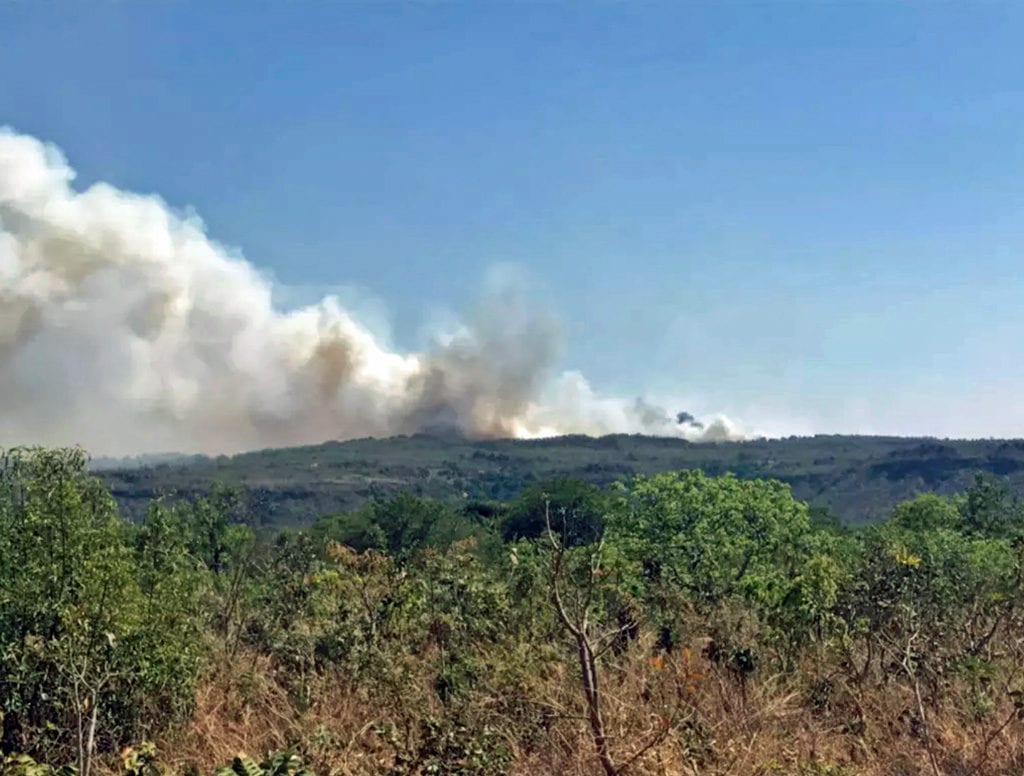 Through the next few days the fire edged closer to the sanctuary as it entered the farms of our two neighbors to the west. Fortunately, the winds were blowing from the east, slowing the advancement in our direction but still traveling through some inaccessible terrain.

Within a couple of hours of the first signs of the fire, the sanctuary had received calls from several concerned residents of the nearby community of Rio da Casca. Some offered equipment to help clear more trails and fire breaks, some offering water trailers to help extinguish the fire when it reached accessible terrain. When Cassia, one of the employees of Elephant Sanctuary Brazil could not get an answer from the local fire department, she reached out to a fire chief who had previously helped for us to procure old fire hose. Within minutes, Cassia was on the phone with the appropriate people, sending them maps we had created to show the line of the fire, which at the time was about 3km long. We also used the thermal imaging camera to take photos that demonstrated the terrain and the strength of the fire on various points.

Help arrived and they investigate the best options, challenges and determined that it needed to be monitored for a little longer while they prepared for what they could do the next day when it reached accessible terrain. On Friday night, Kat and I watched the fire cross the last large mountain before it descends to the house and pasture of our neighbor. At 11:30pm, a time when the fire is normally more subdued, it was blazing more than we had previously observed. At 3:30am, the wind had changed, bring the smoke in our direction for the first time. Kat went to an overlook and observed that the fire had diminished once again. 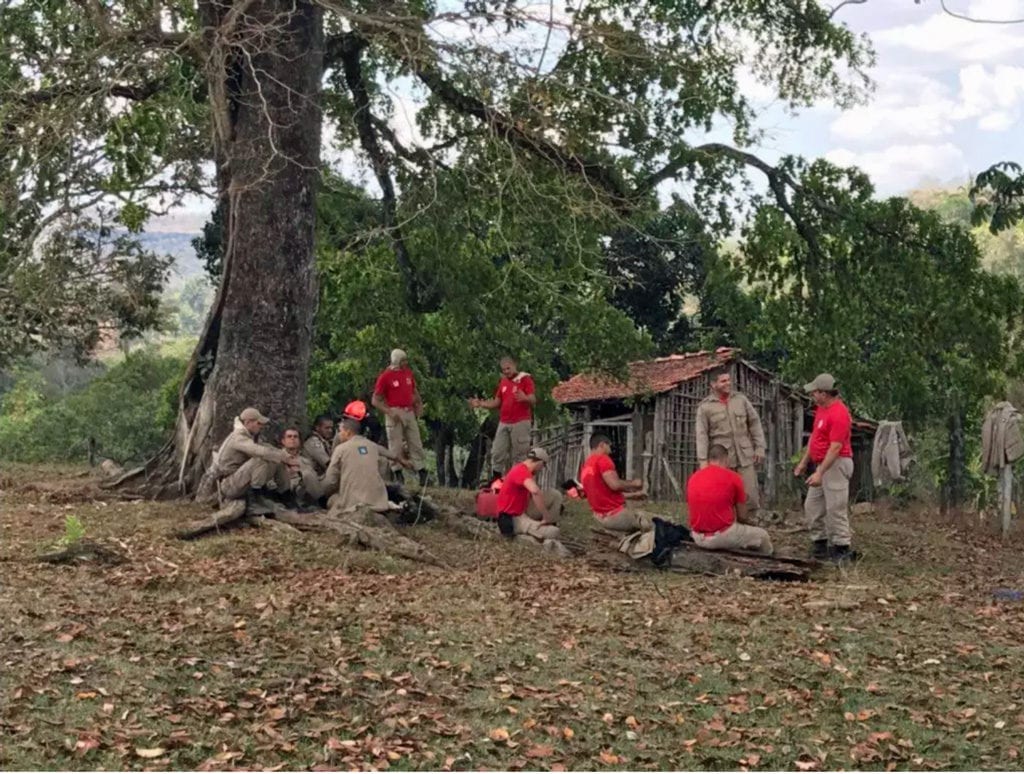 Through the next two days the team of fire fighters grew from 8 to 12 to 24. Simultaneously, the majority of the fire entered into an area in the valleys that have several springs and remain lush throughout the year. This diminished the concern for the sanctuary but the wind was relentless on Saturday and rapidly carried the fire across roads and into brush land that extends for a few kilometers before the next pasture. It also allowed the fire to circle around behind the house of one of our neighbors and someone who has been helping us to weld the new elephant fences. Kat and I had been out monitoring the scenario, trying to ensure that it didn’t cross the road when the winds picked up momentum. Trying to return to get the backhoe, the road became engulfed with fire. After a few minutes we raced back to get the backhoe but our efforts to contain the fire to the west were futile, it had already traveled another 500 meters with no sign of reprieve in sight.

The fire fighters took preventative measures to set back burns ahead of the fire line to help eliminate more risks. This combined with more favorable weather conditions have allowed the fire to be about 90% controlled. The back burn continues to travel (away from the sanctuary) to the already burnt areas. There is a small fire that lingers far in the deepest part of a valley and there is small area that was set as a back burn in the sanctuary that smolders a bit. We are not yet breathing easily but it is all going in the right direction. 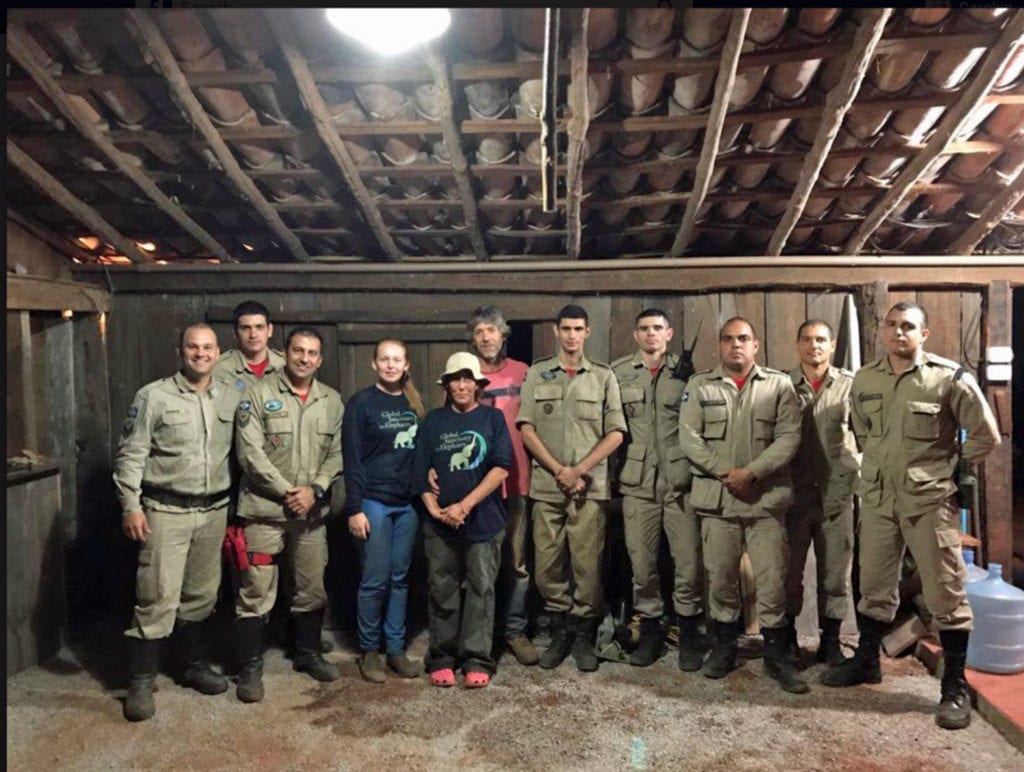 We have some roads in place and have plans to build many more fire breaks as well as to purchase a water truck of our own, but these will all take more time and money. At no point during the fire was there ever a risk to Maia and Guida, they were well protected with more than 3 roads between them and the fire which stayed about 3km away from them. When we are able to purchase equipment of our own, it will not only serve the sanctuary but also our neighbors who are integral members of the sanctuary family.

Throughout all of this, it was incredible to see the outpouring of compassion and support from all of the community. We now have new friends for lifewith the firefighters, many of which have already sent messages saying to call them directly if there is anything they can do, no matter how big or small and they will be there to protect the elephants. With this, we want to extend our deepest gratitude to everyone who stepped up to help us and our neighbors. We are forever grateful.

Now that we are not waking up at 4 am to meet with fire fighters to plan the day and then staying with groups of them until 3 am setting and watching back burns, we can keep you more updated on what is hopefully the next few uneventful days. Although we are usually really good with responding to questions, we are still away through the majority of the day. Ask away, we will try to address them as best we can in our next post. 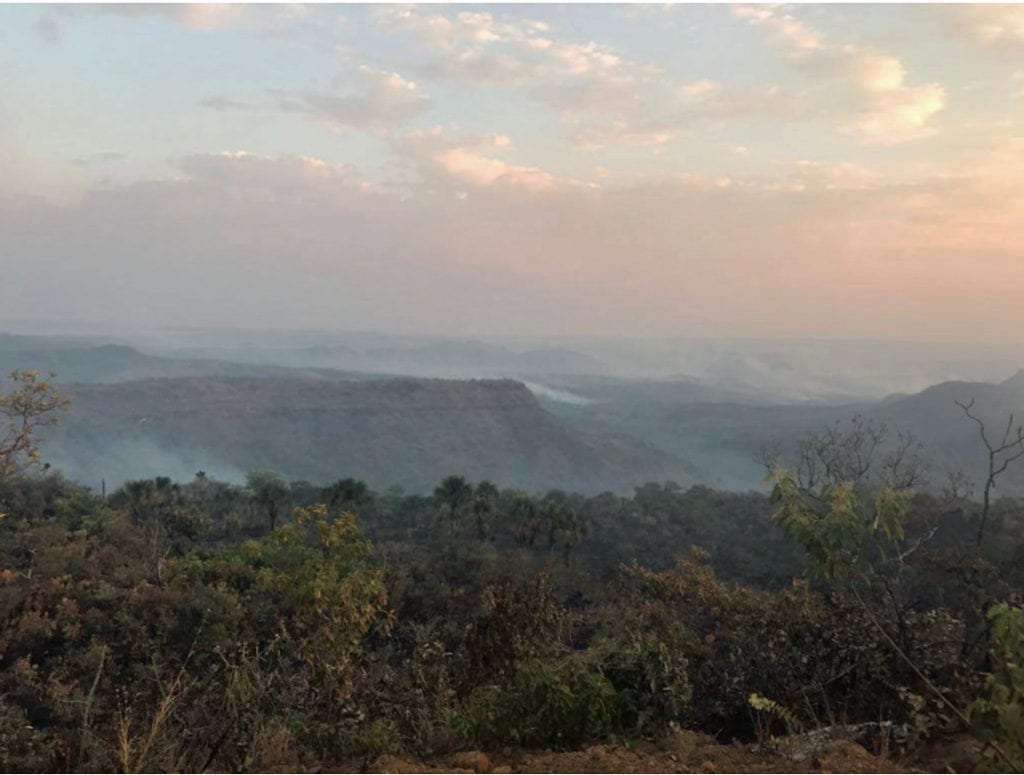 Your ticket for the: The Worst Part of the Dry Season

The Worst Part of the Dry Season