We Have Ourselves A Trader :) 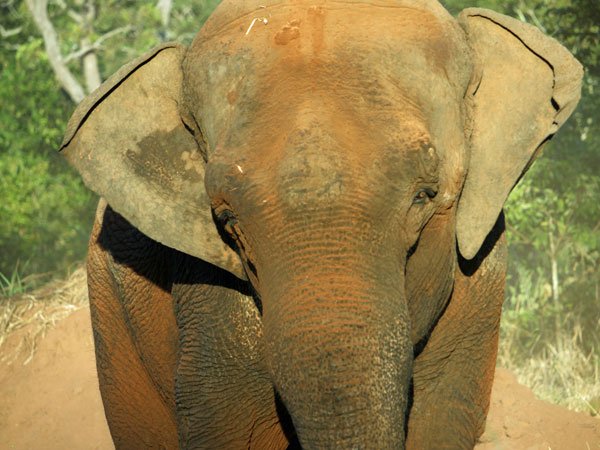 Captive elephants are often starving for attention, they see caregivers interacting and laughing while they are waiting and often not part of the socializing. Being intelligent by nature, captive elephants find ways to get a little attention, and if they are lucky, a few extra goodies.

Recently we have learned that Mara is a trader, as in, she gives you something “special” in exchange for that apple over there in the bucket that she is passively eyeballing. We have seen this with others, actually, Flora (an elephant that Scott and Kat worked with in Tennessee) was a great trader, but Mara is the first of the South American beauties.

We saw this for the first time one recent morning when we were doing treatment with Rana. Generally, we toss Mara a few food items to keep her busy while we are doing Rana’s regular medical treatment, otherwise, she will want to be a part of whatever Rana is doing. If we throw a few handfuls of treats to Mara, she will happily snack nearby while we work with Rana.

After she finished her treats, she walked over and picked up her empty bucket from breakfast. Very gently and carefully, she carried it over and held it out for Kat, and gave her the most endearing look she could possibly express. Kat thanked her, recognized that she was asking for a swap, and impossible to resist, responded with a handful of treats. A few minutes later, Mara apparently wanting more snacks, walked around and picked out a very beat up and soggy branch. We have no idea what made this branch special, but Mara felt it was a beautiful branch. She brought it over gingerly and gave it to Kat, who responded perfectly with more treats. Just to be clear, yes, we know that they train us well.

It’s very charming and sweet, especially her irresistible smile and those gorgeous eyes, but we can’t give her treats or trade with her every time. If we reinforced it too frequently, she is likely to find things to give us all the time. As lovely as the rotten branch was, and as sweet and gentle as she was about it, we would prefer she did other things with her time. Rana probably agrees with us.

Your ticket for the: We Have Ourselves A Trader :)

We Have Ourselves A Trader :)