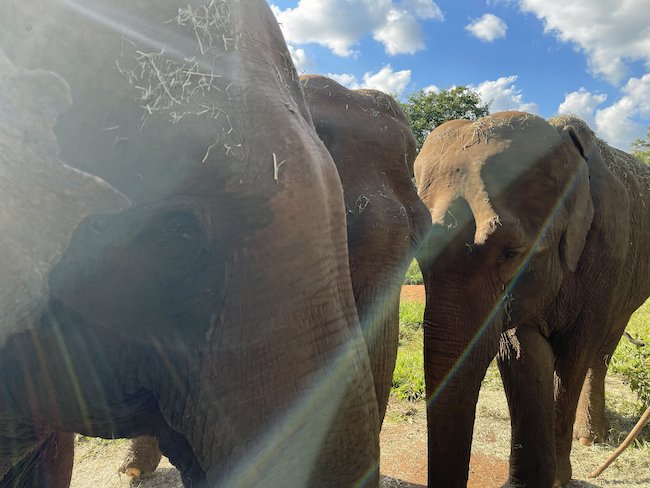 While the elephants have their regular routines, like all of us, they still have days when they decide to do something completely different. Recently, Mateus experienced one of these days.

While checking to see where all of the elephants were, he found Rana near the barn, then headed off to find Mara and Bambi.

Usually, if those two are near the pond, they come out of the woods and walk over to the fence for their meal. They like their mealtimes so much that they walk over when it’s not time to eat – just time for a check-in – hoping there will be food. That day, when Mara and Bambi saw Mateus, they started racing toward him. He headed back to the barn to ask Scott the best thing to do. Scott suggested he feed the two early since they were seemingly ready to eat.

Mateus loaded up the 4-wheeler with Mara and Bambi’s produce, grain, and hay, then he headed out to feed them. He went back to the fence, where they usually go for meals. Mara and Bambi both followed along the fence, but then Mara turned and started walking down a path that leads to the barn. At this point, Mateus had already altered his plans based on what he believed the elephants wanted (dinner along the fence, NOW). But, Mara showed him that she wanted to do something else entirely – presumably eat her dinner at the barn.

At that point, Mateus was tempted to run through all the different scenarios of “if this, then that,” to try to anticipate and plan for her next steps. Scott reminded him to take a moment and step back, allowing Mara to guide him forward instead of trying to control the situation. In other words, let the elephant indicate what comes next. Once we have a better perspective, it’s easier to follow their lead. It’s so important to stop, listen, and continually demonstrate your respect for them. It was an important teaching moment to show when to step away and let the elephant make the decision, even if it might seem like a small thing. Choice is part of the big picture in their lives.

Photo of Rana, Bambi, and Mara (left to right)