Update on Some Non-elephant Residents

We wanted to give a little update on some of our non-elephant residents this weekend. For those that don’t already know, we do wildlife rehabilitation and release of indigenous species that were more commonly found in the area, but their population decreased with human development.  This program is in conjunction with one of our state environmental organizations and the choice to implement this was due to need, and also our experience and licensing for wildlife rehabilitation back in the US.

The video is sweet Alma, who arrived as a rehab tapir, but we immediately realized that was not a possibility. She is about 95% blind and suffers from seizures. To regulate her seizures, she is on antiseizure meds along with other supportive supplements. Thankfully Alma hasn’t had a full seizure for months. Although she sleeps through anything, she is a total love.

Last month we released the male deer that was brought here after his mom was killed. One of our caregivers thought she saw him with another deer in the habitat, but it’s hard to know for sure.

After months of not seeing any of the tapirs that had previously been released, we saw all of them within two weeks. The first time we saw Arya was when she was seemingly exiting the habitat after Rana had a very noisy moment. Even though Arya knows elephants, neither Maia or Guida have ever made those noises. Arya was spotted again in the habitat later that week with another tapir. The caregiver wasn’t sure if it was Sassy (another rehab tapir) or a wild one. 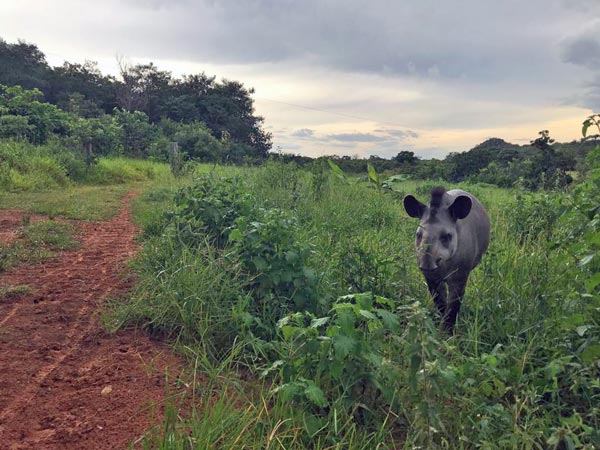 Nutmeg (our first) snuck into the yard when the gate was left open for the bulldozer and filled himself with mangoes before going off on his own. Since then we have seen him a few times- his photo is in the comments below. He’s probably about 700 lbs now. (photo above)

Sheldon showed up once by himself and once with Arya. He’s always been the one we see the least of.

One day there may come a time where we no longer catch a glimpse of any of them, but it was a cute little check-in that allowed us to see they were all looking well.

Your ticket for the: Update on Some Non-elephant Residents

Update on Some Non-elephant Residents