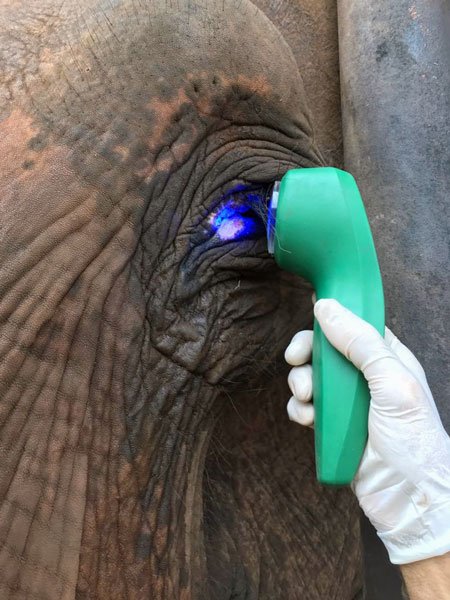 We wanted to do an update on Rana’s eye – as many of you know, she has a papilloma, which we have discussed in several posts. It’s in the wart family and is more common in African elephants, but it does occasionally occur in Asian elephants. They usually look a little like a barnacle. When it first appeared, she would blow on her eye as if it bothered her, but after its initial occurrence, she stopped acknowledging it, so we believe it no longer bothers her.

Before diagnosis, when it didn’t respond to initial veterinary treatment, we had it assessed by a veterinary ophthalmologist. The ophthalmologist performed cryosurgery, which had a positive response. After the immediate healing, progress stagnated. We continued to follow the treatment plan of cleaning and medicating it every other day. It had been working, but very slowly (as expected – most things skin-related in elephants are slow to heal).

We recently had a vet friend visit who works with elephants in Nepal. From her work there, she owns a veterinary cold laser with many proven uses (including successfully treating corneal ulcers on the eyes of horses), which she brought with her to Brazil.

While she was here, we discussed all of the current and future elephants that could benefit from such a tool. So our visitor reached out to J. Mark Strong with Multi Radiance. They generously agreed to donate a new one to her when she returned to the US, which meant she was able to leave her donated laser with us (!!)

This makes us the proud new owners of an MR4 ACTIVet laser. We’ve been using it on Rana for a little over a month now, in addition to her normal treatment regimen, and her papilloma seems to be responding favorably. It is shrinking. Along with the usual healing abilities of cold laser therapy, this laser also has a blue light for fighting bacteria, which means even more benefit.

Here’s a picture of Miss Rana B in the treatment chute with the laser – as you can see, we use it on an angle so as not to point it directly at her eye. Treatment only lasts 2 minutes and she is a perfect girl who receives lots of praise and a sizeable food reward for her stellar cooperation.

We are grateful that her papilloma is responding, but there are many other uses for the laser as well. We used it on acupuncture points for Ramba’s kidneys and intend on using it to improve the condition of Lady’s feet. A huge thanks to Multi Radiance Medical and J. Mark Strong for helping us help elephants!

Your ticket for the: Update on Rana’s Eye