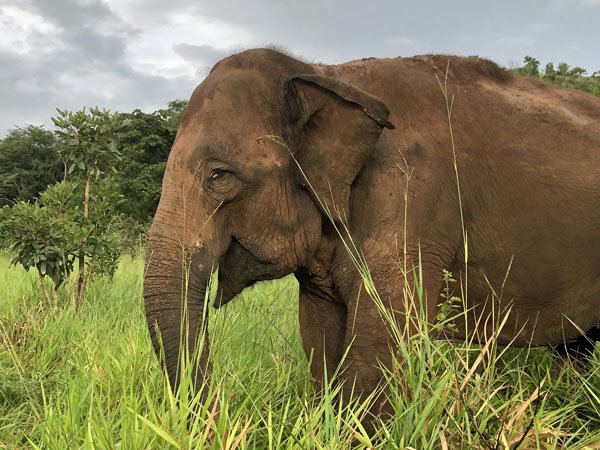 It’s been a while since we’ve done an update on Rana’s eye. It is showing substantial but slow improvement.

For those who don’t know, Rana developed a papilloma on her left eyelid several months ago. It’s the “white thing” near her eye that is noticeable in many photos (you can see it in this photo, taken earlier this week). They can occur on any elephant but are more common in African elephants than Asian elephants. They can appear anywhere on the body, and most of the treatments generally used on papillomas cannot be used this close to her eye safely.

Thankfully, despite its location, it doesn’t seem to cause her discomfort nor interfere with her vision. We’ve used a few different treatments over this time period to figure out what works.

Rana receives treatment for it every other day. It seems to do best when we alternate days – that gives the cells a chance to heal a little and “close up” on the outside. If we wait longer and try it every three days, it builds up a bit of a film, and our treatments don’t have the same impact. It’s probably around half the size it was when we introduced laser therapy as part of its treatment.

We will continue to treat it until it is 110% – that is, we’ll continue treatment for a bit after it fully heals to make sure it is gone for good.

Photo: Rana grazing in a pasture.

Your ticket for the: Update on Rana’s Eye