Update On our Rehabilitation and Release Program 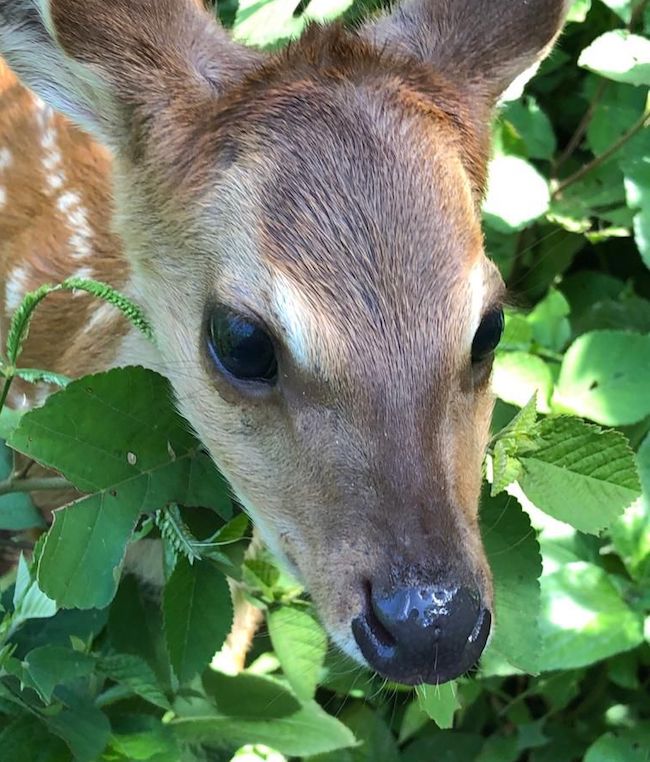 In addition to caring for the elephants here at Elephant Sanctuary Brazil, we have also worked with some injured wildlife in hopes of preparing them to return to the wild. To date, our wildlife rescue and release program has rehabilitated five tapirs, a coati (a member of the raccoon family), a few tortoises, an agouti (a guinea pig-like rodent), a tamandua (similar to an anteater), several wild birds, and three wild deer. We have one resident tapir and one bird who cannot be released. When we began the sanctuary, we didn’t intend to rescue other animals, but it became apparent that there was a need. Kat is a licensed wildlife rehabilitator with 15-years of experience, so we felt confident taking on the task.

The rescue and release program has several stages that allow us to evaluate animal health after they arrive. They begin in a relatively small enclosure for monitoring and we gradually adjust their diet to what they would eat in their natural environment. As they progress, we give them access to a larger, adjoining space that has more natural features that mimic their environment. Once they are physically and emotionally healthy and have adjusted to life in the larger space, they graduate out of the program and back into the wild.

Nutmeg was the first tapir that we took in. He arrived as a juvenile, but became the largest male that we’ve worked with and the most attached to us after his release, which is understandable as he was someone’s pet for about 8 months before being handed over to us. At first he returned frequently, going through our recycling early in the morning and sometimes sleeping with the dogs on the porch. Because Nutmeg’s behavior was effectively the opposite of rehabilitation and release, we built a fence around the house and office; otherwise we worried he would have stayed with us, which is nice, but not the life he needs. We see him a couple times a year now, mostly around mango season, but otherwise he is now fully back in the wild. 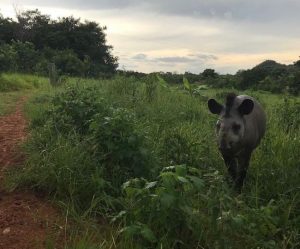 The tapir we called Sassy arrived with another female named Alma (who is now a permanent resident here). We had to separate the two of them, because we realized almost immediately that Alma would be staying here, while Sassy could eventually be released. Sassy was a bit pushy and worked hard to get the best food before Alma could get close. Once released, we saw Sassy and another tapir, Arya, together for 2 separate dry seasons. It seems that they rarely spend time together during the rainy season. Sassy recently stopped by the sanctuary, we assume because she had a corneal scratch. She would show up in the evenings and we treated her for about 4-5 days. Once she felt better, she disappeared back into the night.

Sheldon arrived with a distinct scar on his head. The people who captured him weren’t particularly kind to him and he was removed by the local agricultural agency. He was always the least trusting of the tapirs and was very skittish. That actually works well with wildlife that will be released, because they are not meant to be friends with humans. It is our responsibility to prepare him to return to the wild. Sheldon stops by about once a year, but never comes by the house.

When Arya was brought to the sanctuary, we were told that she was about 5 months old but, in actuality, was closer to 2 months old; she could barely stand. Arya had been fed only cow’s milk and we had to bring her inside to be monitored, given fluids and medicine, and kept warm. Once she was ready to be put in the outside enclosure, she spent a lot of time with Sheldon, who arrived here around the same time. Though she struggled with gastrointestinal and respiratory issues for a few months, she eventually turned into a feisty and strong girl. Sheldon was ready to be released before Arya, but we ended up keeping him a little longer than necessary because the two were so attached. They actually stayed together for a little while after being released.

The last tapir to be released was George. He was the biggest “baby” of our tapir group. (Males tend to be less independent than females.) Once released, we didn’t see much of him until the wildfire, when he showed up at the house. Ever since then, he’s become a bit clingy and comes by more frequently. We see him often now, from every couple of days to every couple of weeks.

Alma remains here at the sanctuary, where we keep a close eye on her. When she arrived with Sassy we realized very quickly that she was almost completely blind and had neurological issues that cause seizures. At some point, she also fractured her jaw – we believe as a result of being hit by a car.  Alma was not at all social at first and understandably so, because she didn’t know where she was or who we were. Because of her frequent interactions with humans, she is now very people friendly, which helps when we need to do bloodwork, give her medication, or simply comfort her when she is having a seizure. We only allowed ourselves to develop a close relationship with Alma once it became clear that she would never be released. 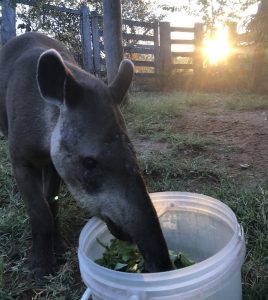 We treated an agouti (a rodent) who we called Sheila that was found by one of our employees after the wildfire. Initially he thought she was dead, but she was barely alive. Sheila was badly burned on her feet and ears and desperately in need of food and water. She recovered much more quickly than we expected and was more than ready to go once we determined it was okay.

Two brown brocket deer also joined us for a while. The first, depending on what story you believe, was orphaned when his mother was hit by a car or killed by a hunter. He was spotted and kept by someone who planned to eat him once he got larger. Eventually he was discovered by a neighbor, who intervened and brought him to ESB. A second brocket deer was rescued by SEMA, the state environment authority, after the wildfires. Both were very young when they arrived and seemed to enjoy spending time together. They were largely kept in the big yard because we didn’t want them to lose their flight response. Once they were old enough, both were released and, we assume, reacclimated easily. We are currently rehabilitating a third deer, who will likely transition into the two-acre yard by the end of the week. As always, we are keeping minimum contact and observing him from a distance to make sure he’s healthy enough to be released.

As time goes on, the community continues to approach us for assistance with injured wildlife. We will do our best to assist whenever we can. Though our original mission was to provide a healthy home for captive elephants, it only makes sense that we would help the wildlife around us to thrive as well.

Photos above of a brocket deer, Nutmeg, and Alma

Your ticket for the: Update On our Rehabilitation and Release Program

Update On our Rehabilitation and Release Program