Earlier this week, Maia, Mara, and Rana were in Yard 1 while Lady was in Yard 2. Kat and Scott headed up to their house to eat lunch. As they left, Maia tried to walk between Rana and Mara. Everyone got a little loud and silly, but it calmed down as Kat and Scott left the area.

As Scott & Kat sat down to lunch, they started hearing some noises from the valley. Once they heard the sounds for the third time in about a minute, they decided to go down and check, although caregiver Shirlei was still at the barn. The girls were all fine when she saw them, Maia was heading towards Middle Road, and the other two were still by the square.

Kat arrived at Maia, who was by herself, happily walking down Middle Road. She gave her a look as if to say, “I don’t know what’s going on.”  Around the corner, Scott discovered an anxious Rana & Mara, separated by a fence. It seems that in all of the commotion, they had accidentally gone into different yards and were surprised to find a fence between them.

Maia, Rana, and Mara had all left Yard 1 by the square. The square is a little area that connects Yard 1, 2, 4 & 5. Once you leave one by the square, if you go straight, you’re in Yard 5; and if you go slightly to the right, you are in Yard 4. Two steps are all it takes, and you’re in a different yard. Our best guess is that one followed the vocalizations of the other, but chose the wrong side of the 4/5 fence. Rana ended up in Yard 5, and Mara was in Yard 4.

It’s worth noting that most captive elephants don’t have the degree of problem-solving capabilities their wild counterparts do, especially when they first arrive at the sanctuary. It’s not that they aren’t as intelligent. In captivity, they rarely encounter challenges that require them to have to think much. Lack of variation, choice, and different results allow that part of their brain to go somewhat unused. It is one of the first changes we see in them after they arrive.

It appears that once Rana and Mara found themselves in different yards, their first reaction was to express their emotions vocally. They comforted each other by staying close. While it didn’t directly solve the problem, it did indirectly- since it brought their humans running to help.

The girls weren’t very far from the gate, so the fastest way to solve the problem was to have someone follow them back a little way and through the gate. Rana was the best choice since she’s more motivated by food than Mara, at least when it comes to walking away from her friend. With a few bananas, Rana started to follow straight away, which caused Mara to follow along as well. Once they started moving, it just took a few seconds for them to “reunite.” Although their separation time was probably about 5 minutes, and they were touching for most of that time, getting back together was reason enough to celebrate.

Here’s a short video – Mara is doing most of the vocalizing. In the first clip, Mara is on this side of the fence, and Rana is on the other (while Scott waited for banana arrival). In the second video, Rana is already in the Yard, and Mara walks through the gate. 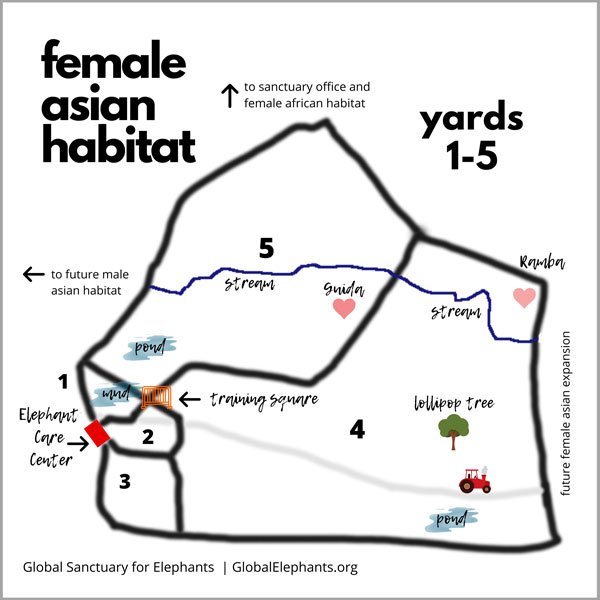 Your ticket for the: There She Is!