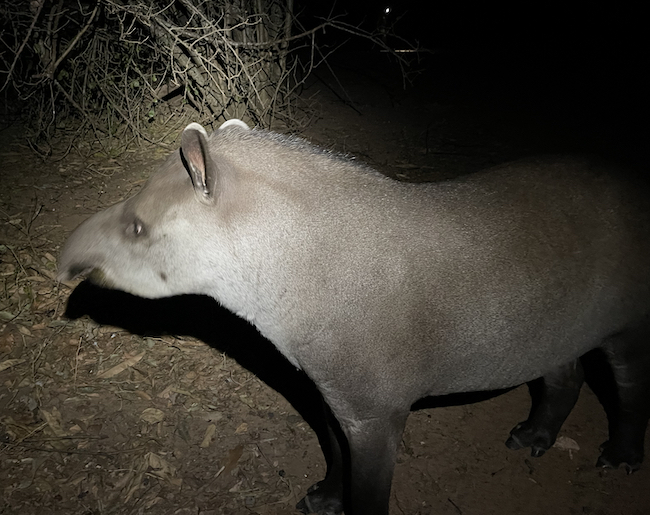 Believe it or not, we still have plenty of mangoes on the property. So many of the animals around eat their fill, even when we humans tire of them. Tapirs are big fans of the fruits and make their way into the area in search of the best ones – though generally at night.

The tapirs don’t consider this their home and, because they were rescue and release animals, it’s best they don’t. However, they do feel safe coming by when they need medical attention. George came back a couple of weeks ago (yes – George finally left us and went back home) with a wound on his crest. It didn’t look like the result of an animal attack, so we suspect he had an unfortunate encounter with some barbed wire from a nearby farm. Kat always seems to have better luck with treating George, because he is not a big fan of men. But he is almost fully healed at this point and on his way back out into the world.

About a week after George appeared, Sassy showed up in the middle of the night. She didn’t stay, but we do see her every once in a while. Sassy has a distinctive look – not quite as feminine as other female tapirs. We rarely see Arya, who is easy to identify because she has a soft look. But even she popped up a few nights ago for some mango treats.

Most of the time we don’t know they’ve come by unless we hear their little cricket chirps. But, it is nice to know they are doing well, even if we don’t see them.

Arya, sneaking by in the dark

Your ticket for the: The Tapirs Let Us Know They’re Okay