The Next Step for Lady: Footwork Tools 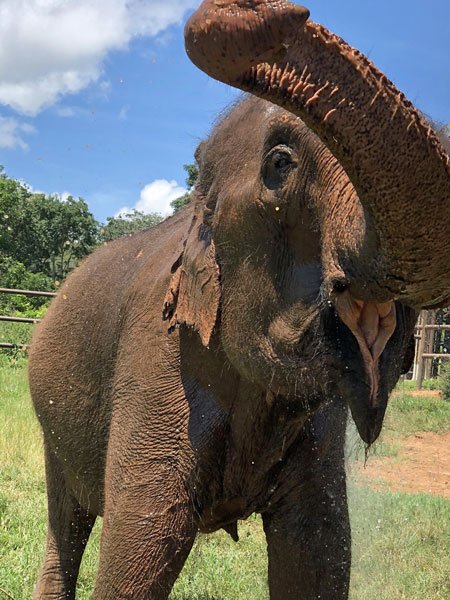 There are a handful of tools used to work on an elephant’s foot – like a rasp, a hoof knife (not as scary as it sounds!), and a router. These are mostly farrier tools, meant for horse hooves, that work well on the nails and pads of an elephant’s feet.

Teaching Lady to present her feet is only half of what is needed – the second half is for her to leave her feet there while we file, trim, and touch all over. Most species tend to be sensitive about others touching their feet, likely because feet are vital for survival, both in the wild and in captivity, and they’re sensitive. Foot disease is one of the leading causes of death in captive elephants, and Lady’s feet are in atrocious condition, even by captive standards.

Lady has been getting better and more consistent in presenting her feet when asked (thanks to her love of treats and verbal praise). This means it’s time to start introducing some of the footwork tools, while we work on getting her to extend the time of her foot presents.

Rather than try it while she presents her foot on a bar and feels more unsure at this point, we tried it with her feet on the ground. Kat brought the rasp (it looks like – and functions as – an oversized metal nail file) over and touched it to Lady’s feet. She didn’t seem to mind, so Kat tried the next step and gently moved it back and forth. Again, it works like a giant nail file, so, while it doesn’t hurt, it does vibrate a little and feels a bit peculiar while it drags.

The goal wasn’t to make any progress on her feet, but just to see how she would react and respond. Excitingly, she didn’t do either. She seemed to be more comfortable with the left foot than with the right foot, but she kept both her feet still while the rasp was touching them. She earned some big rewards and a lot of praise. This shows Lady’s growing trust in us – which is an essential step to working on her feet.

Photo: A silly picture of Lady having a blast in the spray of the water hose.

For those interested in seeing what the foot tools we use look like, you can see them (and even help purchase a few!) on our Elephant Wishlist →

Your ticket for the: The Next Step for Lady: Footwork Tools

The Next Step for Lady: Footwork Tools