The Ladies Have a New Favorite Grazing Spot 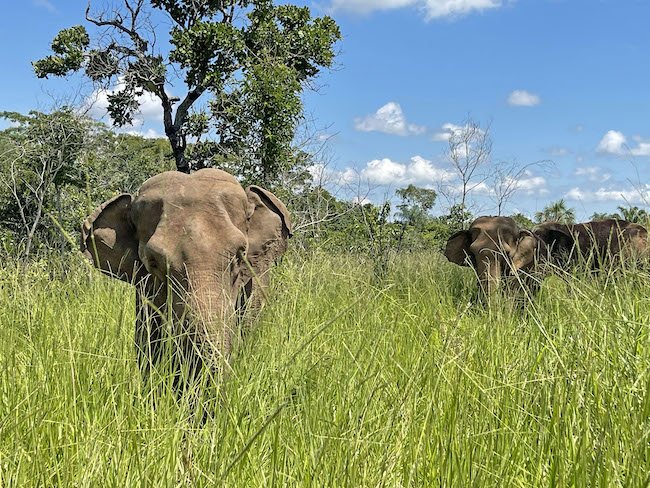 While Maia and Lady spend substantial amounts of time across the creek in Yard 4, the other three haven’t crossed the creek yet this rainy season.

The two had a secret: luscious grass grew back in that space after the fire. Well, it appears that the secret is now out. We recently found Rana out there one evening, but Mara and Bambi were still on the barn side of the creek. Hearing many rumbles, we thought Mara and Bambi had crossed the creek and found Rana. We looked out from the house and saw they were just calling Rana, who ended up going to them.

At night feed, Rana was back across the creek, and we found Mara and Bambi playing in the creek bed to the east of the crossing. They ended up heading toward Scott, near Creeky Alley Gate, so they still didn’t cross into the incredible grazing zone. Rana did not follow them, which isn’t surprising based on what she now knew about the grass in that habitat area.

The following morning, all three girls were across the creek in Yard 4. Mara had visited the area with Rana previously, and Bambi was there when she explored the sanctuary by herself, a month after her arrival. This is the first time we’ve seen all three of them across the creek together. They ate breakfast in that area, and we heard regular rumble parties throughout the morning.

When Mateus went down to bring their afternoon snack, they were still in the same area where they had eaten breakfast.  He encouraged them to head down the creek to ensure they were drinking plenty of water. We have the creek water tested regularly, and it is as pristine as it looks and smells. They ended up heading down to the creek, but then had no desire to come back up. Mara chose to skip her afternoon produce and hay for something even better – incredible grazing and icy cool creek water.

Later, Bambi and Mara came over for dinner along a fence, but Rana continued to stay in the pasture. We dropped off her dinner in that area, and she doubtlessly resumed grazing immediately after her last bite.

Photo of Mara, foreground, with Bambi facing the camera in the background and Rana further back and sideways (yes, that’s a third elephant back there!).  As you can see, the grass is almost as tall as they are!

Your ticket for the: The Ladies Have a New Favorite Grazing Spot

The Ladies Have a New Favorite Grazing Spot