The difference even a day makes 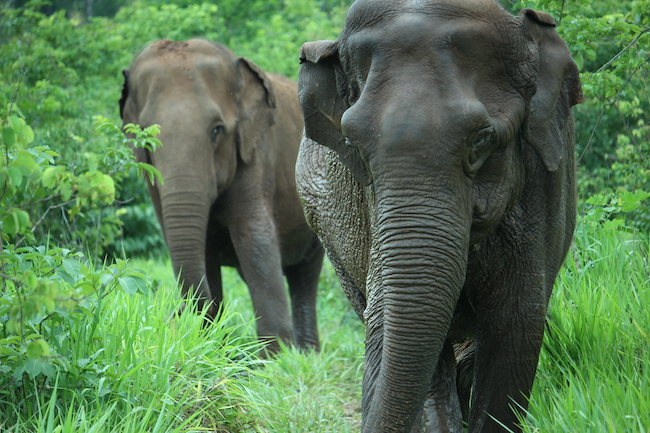 Although Ramba’s time at sanctuary was short, it meant everything.

Imagine living for decades without seeing another of your species. We can’t know what Ramba was thinking or feeling over her years in captivity, but it is very likely that she felt truly, utterly alone at times. Yet Ramba had an indescribable quality that gave others hope: hope that she could have a better future, that a better world existed, and that maybe, if they could help offer her a bit of happiness, there was a chance for real change. Ramba did what no amount of reading and talking and studying could do – she was a living testimony for the power of sanctuary.

Scott first heard of Ramba in 2009, when he was asked to consult on her possible rescue from a circus. Years later, Ramba was supposed to be removed from the circus but, because she had nowhere to go, the circus retained possession of her and just retired her from touring. After her confiscation from the traveling life of a circus elephant, an offer was made for her to be moved to a safari park in Chile. It wasn’t a perfect solution, but it was her last chance to be free from a situation that provided no real life for an elephant. Her rescue and transport to the safari park finally took place in 2012, and Scott and Kat stayed with Ramba to train both her and her staff of caregivers, none of whom had ever cared for elephants before. Ramba had a spunky grandma personality and, now that her whip-smart mind was being utilized, she picked up the needed behaviors quickly.

From the beginning, it was no secret that Ramba had medical problems. We quickly learned that she had kidney disease, and multiple veterinarians estimated that she had roughly a year to live. Knowing that every opportunity to help an elephant live a better life is worth exploring, Scott and Kat made strict dietary adjustments and changed her care routine to include health supplements, oils and essences, and various treatments that were new to her; somehow Ramba lived another seven years. We returned to the safari park several times to check on her and address concerns, and she seemed to bounce back most of the time. But, no matter her progress, the goal of everyone who worked with Ramba was ultimately a life at sanctuary. She deserved no less.

By the time things were eventually sorted out to bring her home to Elephant Sanctuary Brazil, and we arrived in Chile to move her, we were concerned about whether Ramba’s health would allow her to make the trip. Everyone was aware of the risks, but they also understood that Ramba may not have much more time left in the world. Even so, all who knew Ramba – from her caregivers, to Chilean rescuers, to supporters – felt that she was worthy of everything that could be given; we all believed it was worth the risk to bring Ramba to sanctuary. It meant the opportunity to experience everything that was taken from her: other elephants, nature, seemingly endless space, and true autonomy.

Once here, Ramba’s joy was not only evident, but it was inspiring. She embraced every moment of sanctuary, traveled to every corner, and never slowed down. Ramba wanted it all; she deserved it all. Though she was only here for ten weeks before passing away, she took advantage of her time here. Sometimes, it seems when an elephant understands they don’t have much longer to live, they dive right into life with a fervor and do their best to wring every drop of beauty from their days and nights. When an individual knows true love and safety, they may feel safe enough to relax and admit that they’re done fighting. Perhaps that is what Ramba did.

There were many reasons to found a sanctuary in South America, and wanting a better future for Ramba was a big part of that. And, ultimately, she was also the elephant that epitomized how every moment of time spent at sanctuary is worth it. Ramba, like all captive elephants, lose so much when they live in cold, lonely, and inappropriate environments. Parts of them get lost or hidden along the way, and much of that hidden self emerges at sanctuary, and almost always quickly. Those of us who knew Ramba would not have traded the time, effort, expense or, truly, anything for those ten weeks of freedom.

Your ticket for the: The difference even a day makes

The difference even a day makes