Thanks to Mother Nature and You ❤️ 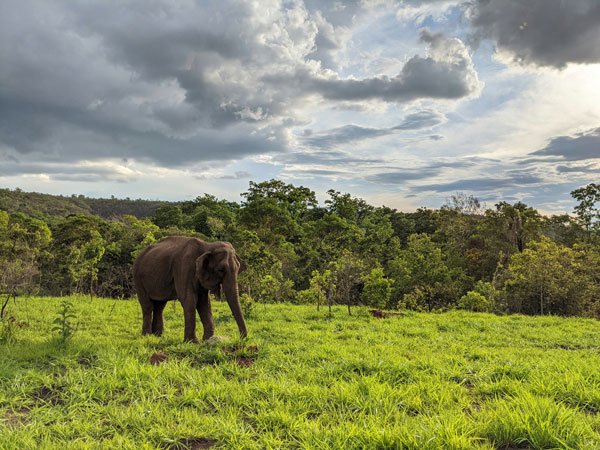 It’s been a little over six weeks since a wildfire ravaged the property, leaving devastation in its wake. Shortly after, while still reeling from the shock, we launched an impromptu fundraiser to help us rebuild. Thanks to your generosity, we raised almost $40,000 in a week. The support we received was overwhelming, and we wanted to share a little about what has happened since and where your donations have gone.

Life has returned to normal in many ways. The rainy season is here in full-force, although not as wet as past years, which has made the land vibrant and lush. This photo of Bambi was taken across the creek in Yard 4, an area that burned in the fire. It’s hard to believe that this area looked barren a few short weeks ago. As you can see, it is covered in gorgeous, Bambi-approved grass.

While all the regrowth in the photo is all to rain, we’ve been doing our own work to rebuild as well.

The melted water tanks are all replaced, as well as hundreds of feet of water lines. The spring, located on a hill, is above the habitat and below the main office. The barn tanks are filled by gravity, but everything on the hill (the house, office, goats/chickens, wildlife center, etc.) is powered by a pump destroyed in the fire. We have replaced the pump, as well as the electrical wiring to the pump.

We recently received our first delivery of indigenous trees to replace those that died in the fire, and have an order of bamboo delivering soon. We are working to coordinate with local volunteers to help us plant them. They will be planted in areas cleared by the fires, and the bamboo will help feed the elephants for years to come.

The fencing in the Wildlife Center has been repaired and is currently housing a young deer, and of course, Alma. Most of the wood supports for the original fencing burned in the fires. The tremendous logs smoldered quietly for days, so the cables (used to hold cattle for the previous landowner) and posts were replaced with steel fencing rolls. Because of the location and a roof desperately in need of replacing, plans were already on the list to build a new wildlife area west of the office. The fire moved it higher on our list, so it is happening now. Additional rolls of steel fencing have now been purchased for the new wildlife rehabilitation areas. Our choice in material is resistant to termites and fire and should overall be much more durable than wood. A simple security camera will also be added to the Wildlife Center. It will allow us to monitor Alma’s behavior and seizure activity as well as observe any wildlife working toward release.

Wildlife that is brought to us arrives at different ages and stages of life. While some have been kept as ‘pets’ and our job is to break that bond, others arrived incredibly frightened. Fear of humans isn’t seen as ‘negative’ for wildlife, and hiding from humans serves them well once they are released, but can make it difficult to monitor behavior. A camera would allow us to monitor cases more efficiently than Kat hiding at a distance to observe.

There is still a seemingly never-ending list of things to do, but that is something we are used to at this point. We are pleased with the progress being made toward rebuilding what needs rebuilding and improving what we have an opportunity to improve. Thank you for continuing to help make the sanctuary a better place. ❤️

Your ticket for the: Thanks to Mother Nature and You ❤️

Thanks to Mother Nature and You ❤️