Tapir Rescue At The Dam

Let’s start with the tapir was fine in the end, and go from there

We received a message that there was a tapir stuck in the holding pool of the hydroelectric dam. There is a crossing that acts as a good water source for wildlife during the dry season, but about three times a year, an animal gets caught in the tide and washes into the holding tank and can’t get out. The electic company uses a machine to get them out, but this time, this big boy wasn’t having it, so they called us. By then, he had been swimming for several hours and was losing steam. Tapirs are amazing swimmers, but generally don’t do anything physical for extended periods of time. 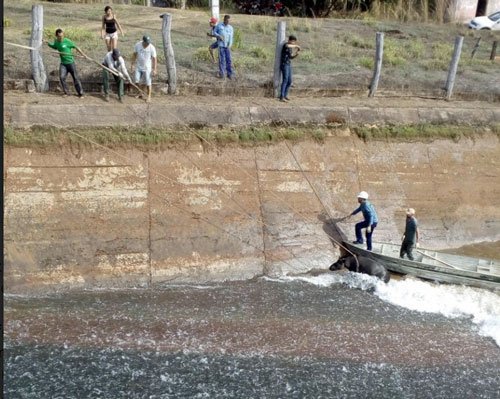 Scott is the person in the back in the boat. The tapir is in the water near the bow of the boat. Panto (green shirt) and Kat (not shown) are up top.

Someone in town lent their boat, and Scott and Panto (one of our maintenance guys) went in to try and get him. Panto has good lasso skills, but tapirs are fast swimmers and great divers, and since the lasso wasn’t weighted, it wasn’t easy. The electric company can’t shut the dam or turn off the water, but they did start dropping the water level. Once the level was down and the tapir could stand and breathe, Panto got a rope on him. The video shows Panto (in the green shirt) keeping the tapir’s lassoed head above water while Scott tries to get a lifting strap secured around his body and one of the electric company’s workers steadies the boat.

Tapirs bite as a defense, there was one who tore a man’s arm off at a zoo, so everyone had to be careful and he weighs about 800 lbs. Tranquilizers could not be used because of risk of drowning (for those who think it would have been nicer to sedate him.) Once he was secured, the small crowd above then pulled the tapir up the cement wall and onto dry land. He was then driven a short distance away so he could rest in the shade of a forested area.

In the end, he was a little scraped up, but not bad considering what he had been through. We are very thankful to Panto not only for his lasso skills, but for truly caring and wanting to help in a part of the world where shooting and eating the tapir is what many would have considered a better option. He is not only a great worker on grounds, but someone we’re thrilled to have as part of our team. Now along with our downed elephant protocol, we need to try and perfect our tapir rescue protocol.

RELATED LINKS
Wildlife Rehab & Release Page → please visit this page for additional information on our work with the native tapirs and other wildlife.
Scott & Kat Blais → GSE Co-founders who were involved in this rescue

Your ticket for the: Tapir Rescue At The Dam

Tapir Rescue At The Dam