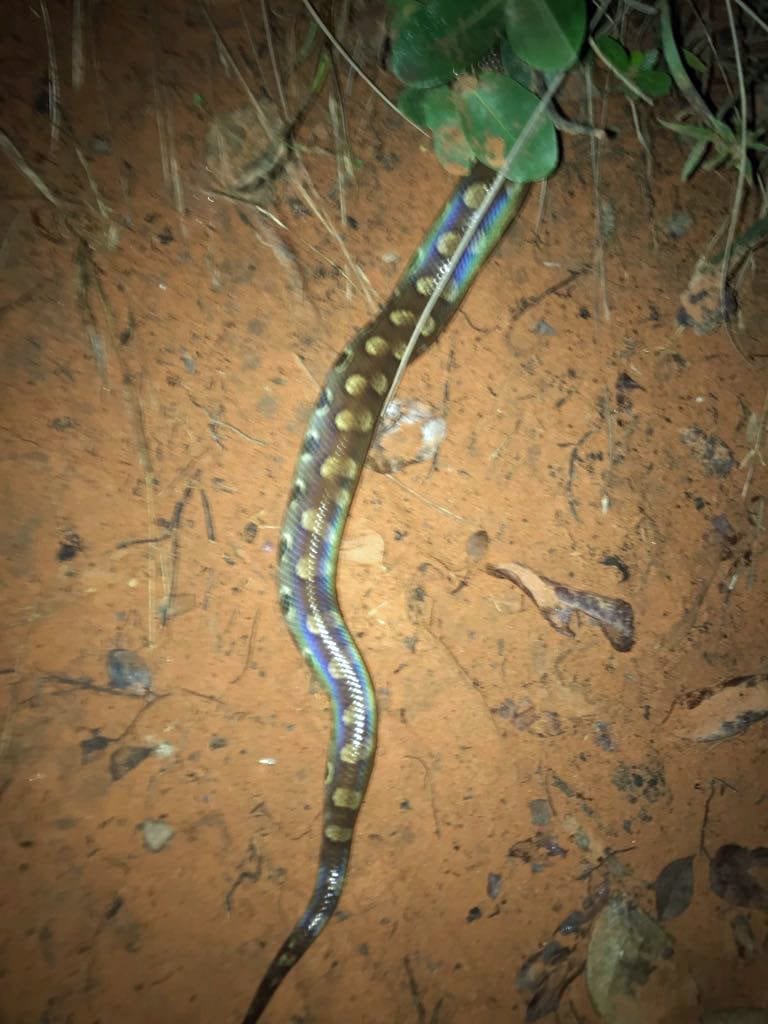 Sanctuary, where life hands your tapir foot prints and rainbows in the middle of the night…

When people dream of sanctuary and just how fabulous it would be to support the rejuvenation of life, rarely would foot prints and rainbows would come to mind. In truth rarely would most of what we do in a normal day come to mind. This life is a blessing to the highest degree, it’s a gift of unimaginable proportions and it’s incredibly diverse. This is particularly the case out here in the middle of seemingly nowhere, a location where independence, ingenuity and adaptability are key. The reality of our day to day is that we spend less than 15% of our time with Maia and Guida. Most of our time is spent behind the computers, construction, planning and fundraising. Every once in a while, actually quite frequently, there’s a twist, a curve ball that unfolds into frustratingly wonderful experiences.

A couple of days ago, we poured a concrete floor for a soon to be rest/lunch area for our incredible team. As the concrete is coming from more than 4 hours away, they put an additive into the mix to slow the curing rate. All went well with the pour and as with most concrete, you get the first part done then wait. On this day, which was unseasonably cool and misty, we waited and waited and waited as it was unforgivingly slow to cure. As the daylight fell below the horizon, we were still waiting. By 9pm I was able to do a little troweling and then waited again. I returned to the house to tend to critters and get a little sleep. 2:30 arrived and I went down again. I contemplated waiting until the morning but felt that it was better safe than to arrive a few hours later to a hardened floor, a choice that in hindsight was absolutely the right one to make.

To my amusement, I arrived to tapir prints, pressed deep into the concrete with all 900lbs of his weight. He seemed to walk in, sinking deeper as he went, turned around in the middle and walked back out. Pictures don’t show the 3 inch deep depressions well, nor do they show the waves of concrete as his feet not only left impressions but displaced the surrounding and partially cured concrete, adding waves of humps and valleys.

After more than 90 minutes of work, the foot prints were filled and the waves were almost resolved. Then I needed to fill my own impressions- fortunately my 140 lbs were less damaging.

Just past 4 AM, ready to go up the hill to sleep for another 90 minutes before taking care of chickens and other tapirs, I came across a midnight rainbow. This 4 foot long snake had just crossed the road, glistening as she was illuminated by the headlight of the ATV. She paused just long enough for me to get two quick photos then calmly she continued on her way. Later the next day, I learned that she was indeed a Rainbow Boa, common to the region but rarely seen. Another incredible sanctuary gift, all thanks to Nutmeg’s concrete adventures.

For those dreaming of living and working in a sanctuary, think outside the box, way, way, way outside the box and then imagine troweling tapir prints and midnight rainbows and you’ll start to approach what is “normal” in the day to day of sanctuary life.

READ MORE ABOUT THE SANCTUARY TAPIRS:

Your ticket for the: Tapir Foot Prints And Rainbows