Taking Turns During the Morning Treatments 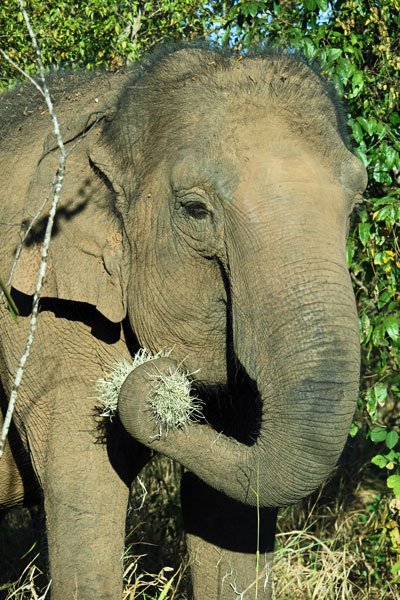 With the ever-evolving dynamics among the elephants, we sometimes have three elephants around during morning treatment. Lady usually doesn’t focus or relax during her foot soaks in the barn if other elephants are around, but is fine with treatment if she is in the habitat. If it is foot soak time and the others are at the barn, we will skip her treatment and try to do it later in the day. If she is nearby during someone else’s treatment, though, she seems to be interested in watching them.

When it’s Maia, Rana, and Mara for the morning treatments, they tend to each wait their turn. Patiently standing a respectful distance away isn’t something we taught them, it’s just something they’ve fallen into on their own. It’s another way that they are respectful of each other’s boundaries. In terms of the order the elephants receive treatment in, it varies greatly. We decide at the moment, based on multiple variables – from location to demeanor to which humans are present.

When Maia has a “full speed” day, we will usually do her first, and then walk her away a bit, and give her some hay. While one caregiver does that, the other will get ready for the next elephant, who usually walks over on their own for their turn. Again, once the next elephant’s treatment is done, we’ll give them some hay relatively close (since it’s usually either Rana or Mara who like staying near) and then start on the last elephant.

They not only seem fine waiting their turn, but they seem interested in watching the others receive their treatments. Mara is still learning new behaviors that are part of sanctuary life, so it is beneficial for her to observe the others. Since she’s still learning, Mara receives ‘good’ treats for getting in position or for letting us hold her trunk. For Rana and Mara, those behaviors aren’t behaviors that earn big rewards – they’re the first step to begin earning treats. We sometimes see Rana watching Mara in a way that makes us wonder if Rana believes Mara gets treats for doing nothing. It makes us laugh because Rana still gets plenty of treats!

Your ticket for the: Taking Turns During the Morning Treatments

Taking Turns During the Morning Treatments