Lady is definitely becoming a little more confident in her approach with other elephants. For those who follow us on Instagram, you have already seen this video, but not the rest of the update.

The video is Lady with Rana. Lady had come to the trough for a drink, and on her own, decided to come closer to see Rana. As you know, Rana is all about other elephants, but since she is a little more subdued right now, she’s more approachable for Lady. Lady didn’t get any closer than this but stayed around for a bit just watching Rana.

The next day she had a little meet and greet with Maia. Scott was taking Maia past one of the yards for dinner. Lady heard the four-wheeler as well (yes, she knows it’s the food wagon now 😉 ) and decided to head towards it. Maia was on one side of the fence, Lady on the other, set to converge. They got really close before both of them stopped. Only about an elephant’s length away, neither tried to touch, but Maia did put her trunk up to smell in Lady’s direction. For about five minutes, both of them calmly checked each other out. The curious thing about this and other interactions we have seen with Maia is that since Ramba’s passing, she seems more interested in the other elephants. More than we have seen since Guida. She’s a little more patient, curious, and bright-eyed.

We have added a photo below from the next occurrence, I love the angle on Maia, even if it is in the barn. Maia had come to the barn in the morning for breakfast and a check-over. Lady was already in the barn but quickly exited as Maia went into the other stall. We didn’t say anything, and about two steps outside of the barn, Lady stopped, casually turned around, and headed back in. It seems she’s starting to understand that this is a safe space, and the elephants here (and humans) aren’t trying to hurt her. Lady came about halfway in and stopped, stood for about a minute, and then gathered up the courage to go back inside. We would have gladly fed her outside, but we like to allow them to decide.

Neither elephant showed that much interest in the other- they are both very food motivated. When each was done eating, both ladies went into the patios on their own, Lady for foot soaks and Maia for her once over. Lady would look over at Maia during treatment and was watchful, but she did well.

Read more about the girls on their pages: 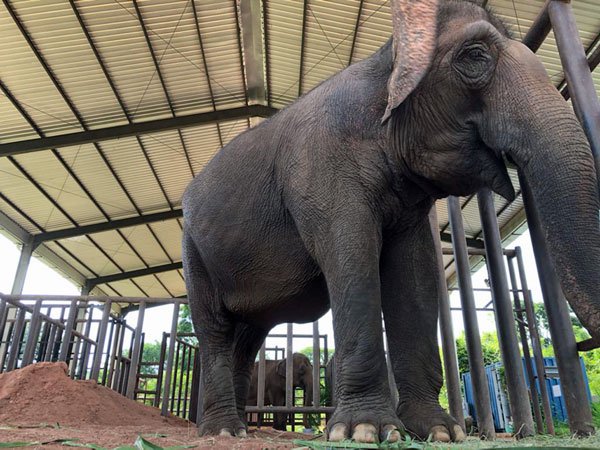 Video cameo by Roger the Rooster.  He’s the one that “welcomed” Rana to sanctuary a year ago.  🙂

Your ticket for the: Step by Step