Spending All of Their Time Together 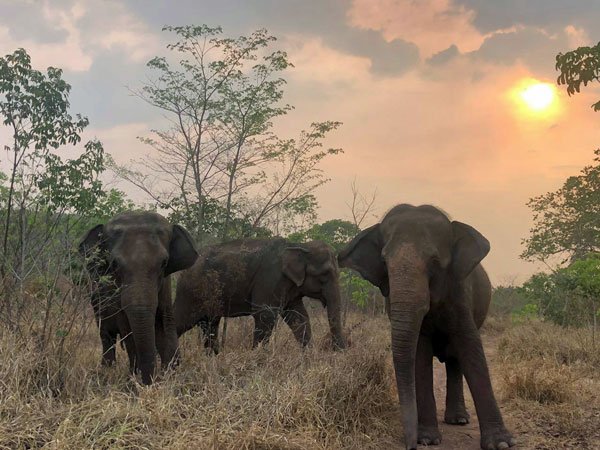 Rana, Mara, and Bambi are continuing to spend all their time together, including mealtime, resulting in some hilarity.

Bambi is very enthusiastic – she is likely the most energetic creature (including the humans!) at the Sanctuary during this heatwave. Rana and Mara continue to be very lazy and unmotivated in this heat. It’ll be curious to see how things shift when the weather cools off. For now, Bambi moves at a much different speed than the other two. Knowing this, Kat and Scott went out to feed the three together. The plan was that Bambi would follow one person, and Mara and Rana would follow the second, but we would lead them to the same area for a snack. As happens with plans involving three elephants, it went quite differently than we envisioned.

At first, Bambi followed as enthusiastically as anticipated but quickly decided to go back to stay close to her friends. At that point, Rana chose to take the lead (as we mentioned in yesterday’s post, she is highly food motivated right now). Rana was doing great following and was almost at the gate when Mara decided to make her “ERRRR” noise.

As soon as Mara vocalized that sound, it was like a switch flipped. Both Bambi and Rana came running back to Mara, setting us back.

Once the other elephants arrived at Mara’s side and investigated her, Mara started following. It seemed like Mara decided she wanted to be first, but rather than rushing; she manipulated the situation to ensure she was first with minimum effort.

Once Mara was in the lead and following, everyone else followed well, and we fed them all in a shady area of Yard 5.

In terms of mealtime, the three seem to be doing well. Once Bambi finishes eating, she heads over to Mara. She doesn’t try to take Mara’s food while Mara finishes her dinner. Mara is very picky, so once Mara is done eating, Bambi will eat what Mara leaves behind. It’s nice to see everyone being respectful of the other’s meals.

Your ticket for the: Spending All of Their Time Together

Spending All of Their Time Together