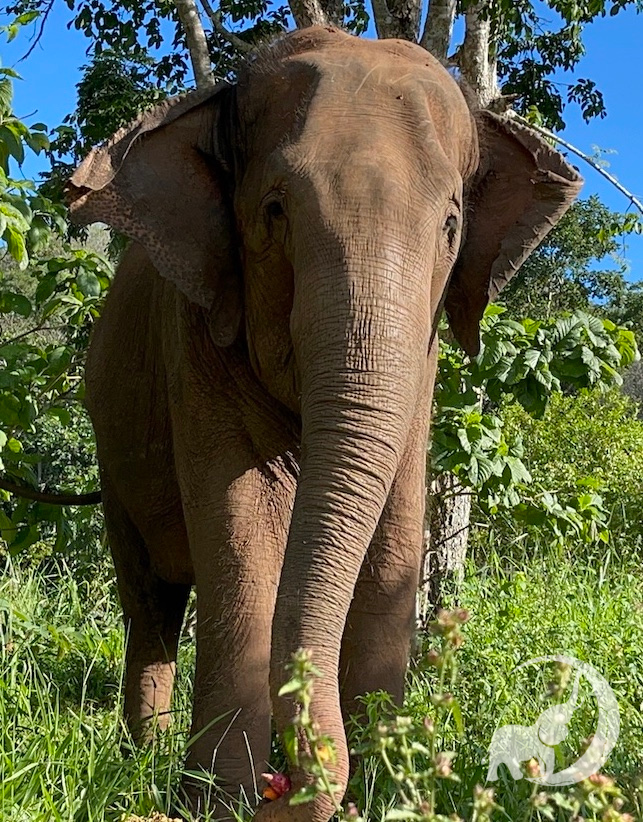 Our group of three known as the “Powerpuff Girls”: Bambi, Mara, and Rana, are known to often eat together. They don’t spend every moment right next to each other; sometimes they are within a couple feet of each other, sometimes they’re in the same field, and sometimes they break off on their own.

When Scott headed out to feed the elephants a few days ago, he found Rana nearly racing toward him, ready for her dinner. It’s always charming to see Rana when she’s hustling ahead, since it means she has to swing out her front leg to maintain top speed. (For those who don’t know, Rana’s elbow was injured when she was 5 years old, and she doesn’t seem to be bothered by it as an adult.) Though Scott asked Rana, “Where are your sisters?,” she kept heading his way, all smiles – just charming him to get her food first.

After Scott fed Rana, he found Bambi and Mara a bit farther back down the same road, moseying at their typical slower speed. He ended up feeding them in the same general area as Rana, then hung around afterward to make sure everyone was relaxed. Of course they were all fine, and quite social and affectionate after dinner. These three clearly adore one another, but sometimes food is the most important focus of the day.

Photo of Rana enjoying a snack

Your ticket for the: Sometimes Food Comes First