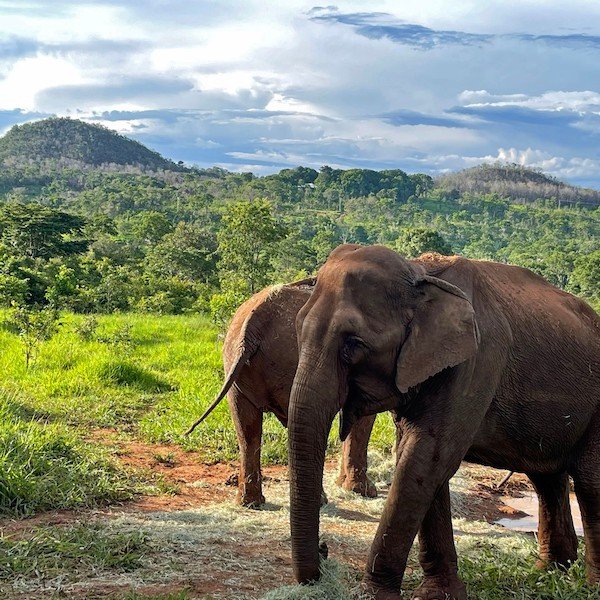 Mara and Bambi continue to do excellent with sharing space. It seems that whatever happened before has been left in the past. The two frequently make us laugh with their regular antics.

One recent night, Mara and Bambi were together for dinner. Mateus brought them to a fence and put down Bambi’s food first. He turned around to get Mara’s food off the four-wheeler, and Mara walked over and started grabbing Bambi’s food. Mara grabbed a trunk full of grain and a few carrots, which she shoved in her mouth. It apparently didn’t not meet her ever-evolving standards as she promptly spat back out. She is generally quite picky about carrots. We get our fruits and vegetables directly from a supplier, so they are pretty fresh. Mara likes the fresh carrots, but about two days after they are delivered, she will stop eating them until the next delivery arrives.

Mateus put down Mara’s food, and Mara headed over to her dinner. With all of her big feelings about Bambi’s stolen food, she decided not to eat her food either. She inspected her dinner, grabbed a single watermelon, and went off into the bushes. Typically, it’s not a big deal if an elephant skips a meal, but it’s a bigger deal with Mara. Mateus radioed Kat and Scott to see if one of them could go to Mara in the habitat to re-deliver her dinner. As he is still training, Mateus does not drive in the habitat by himself.

As Scott gathered Mara’s dinner to find her in the habitat, we heard many loud vocalizations that sounded like Bambi. When Scott went looking, he found Mara crossing the creek in the back of Yard 4, and Bambi was on the other side vocalizing. We have no idea what happened. We don’t know if Bambi was searching for Mara or what was going on in their brains. Mara ended up eating her dinner, though, which is what matters the most.

Later that night, all three – Mara, Rana, and Bambi were together. Scott decided to bring them near the pond to have easy access to water with their meals. Rana started following first, and Bambi came right after. In response, Mara squeaked, so the other two turned around and went running back to their friend. Scott guessed Mara wanted to go the other way, so he tried to lead them in the other direction. Rana and Bambi both happily followed, and then Mara said, “SQUEAK!” so they turned around again. We know that Mara’s squeaks will always win, so we ended up feeding them in their current vicinity.

Mara was very bright the next morning and seemed to be in great spirits, which made us laugh even more.

Your ticket for the: Sometimes Carrots are Just Gross