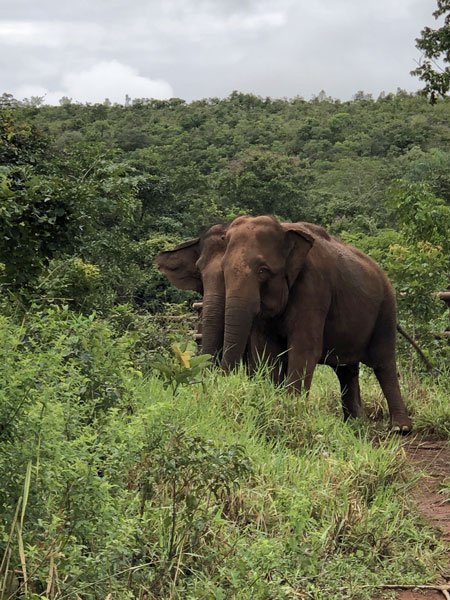 Rana is living her best life – mornings with Lady, afternoons with Maia. As Lady & Maia both prefer alone time more than Rana does, this works out well for everyone.

Rana’s been happy with her afternoons with Maia. The two are growing closer and more comfortable. Occasionally, we hear Rana trumpet with excitement in the middle of the night. From the tone (it’s an excited-surprised trumpet), the humans who hear it laugh, assuming it’s because she has met up with Maia and is overjoyed about it.

Maia tends to be a dominant elephant. Being dominant isn’t a good thing or a bad thing, it’s just a personality trait that some animals have (including humans). Historically, part of her way of displaying dominance is to take food from others (generally not Guida). Even if she doesn’t want it, sometimes she doesn’t want them to have it either. Maia is very food-oriented, so it’s worth noting that her taking food she wants (or sharing another elephant’s food with them) is different than taking something from another elephant she doesn’t want.

It’s also worth noting that Rana loves old palms. Everybody else is pretty picky and wants fresh palms (which we deliver daily). Once they start to dry out, all the other elephants turn up their noses. Not Rana. Rana is delighted to find a two- or three-day-old palm and start crunching on it.

Rana & Maia’s relationship is continuing to shift as they spend more time together. Caregiver Shirlei recently came upon Rana & Maia in the habitat. They were standing side by side, with their bodies touching. Rana was eating a two-day-old crunchy palm (which nobody would want but her), and Maia was peacefully standing next to her, ignoring the palm. It’s a great example of how their relationship has shifted. The Maia of a year ago would’ve taken the palm from Rana just for the sake of taking it. The Maia she has become is just happy to be standing next to a friend. ❤️

This photo isn’t from that day, but is of Maia & Rana standing side by side, happy and content. Rana is closer.

Read more on their pages:

Your ticket for the: Side by Side. Happy and Content. ❤️