She Will Never Stop Impressing Us 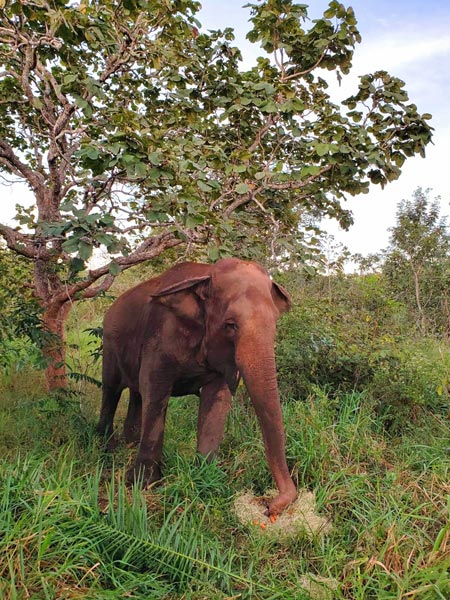 Cute little Rana Bug has a papilloma on her left eyelid. We noticed something was going on near the corner of her eye. After treating it for a little bit without much of a response, upon recommendation of a veterinary ophthalmologist, we took some samples and ran a few tests. Diagnostics came back as a papilloma.

Ok, this is going to be a brief summation, if there are more in-depth questions, Google or Siri is your place to go

. They are found commonly in elephants- when they are younger, there is usually a viral component, when they are older, there rarely is. There was no indication of any viral cells in her sample. They are almost always benign and don’t spread to other parts of the body. General treatment is cryo or laser surgery, both of which are risky because of location. There are topical medications that are used sometimes as well, but those are also not options because of her eye.

As of now, we are treating it in a general way and seeing what sort of response she has. It hasn’t progressed since her diagnosis. We are looking into some less conventional treatments that have been used with some success, that won’t endanger her vision or possibly cause damage to her eye. As with everything Rana has dealt with, she is fantastic. She was great for testing, allows us to clean and medicate it, and is an absolute peach. On the one hand, it shouldn’t be surprising because she’s so good, but on the other, you can’t help but be impressed at how cooperative she is as she leans in and allows us to put ointment directly into her eye, as a protectant (she very cutely blinks a lot as she lowers her head). There’s a chance she will never stop impressing us.

Your ticket for the: She Will Never Stop Impressing Us

She Will Never Stop Impressing Us