She Is a Very Special Lady ❤️ 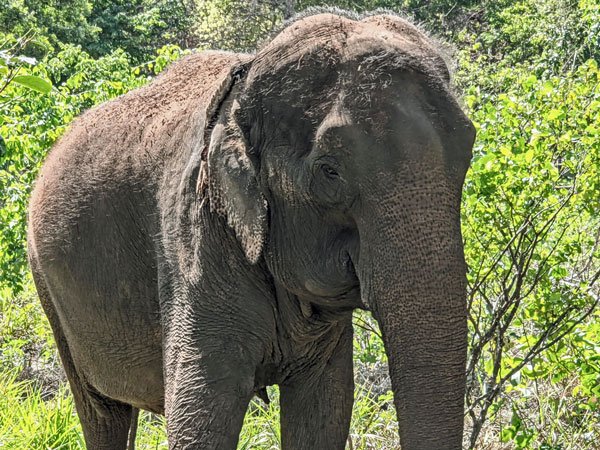 We know many of you are smitten with Lady, and we feel the same. There is something about her eyes, the hair, and that cheeky smile that melts everyone who sees/meets her. Even when she first arrived, and was still lashing out, it was so easy to get lost in her charm. All of this also makes it easier to forget that her feet are not in good condition.

Lady is doing well, sometimes better than we think she should be feeling. For those of you who don’t know Lady’s story, after a lifetime of circus and zoo, she arrived at Elephant Sanctuary Brazil with her feet in horrific condition- in the top three worst we have ever seen. Once she was trained for foot care and trusted us enough to allow us to work on feet that were clearly painful, a lot of progress was made. The change was drastic, but unfortunately, Lady most likely suffers from osteomyelitis, and we expect her to have foot issues for the rest of her life.

Right now, she has active issues in both front feet, in the 4th nails, which are the ones that had issues in the past. She had a small blowout above her nail on her left foot several months ago. That area resolved, but now under the nail is where the issue lies. On the surface, it doesn’t look that severe, but the worst of it is within the foot. The tissue in that area is soft and a metal feeder tip can be inserted for flushing. That is something that should not be possible. The big concern is we don’t know how far that area spreads since it could be behind all of her toes.

These areas are often a result of dung, debris, and infection being covered up by layers of pad and nail overgrowth and festering within the foot for years. This area could heal, and another pocket of infection could be waiting somewhere behind it. What we find in her feet over time is a direct result of the past decades of foot care, and why foot disease is still a leading killer of captive elephants.

This post is a little heavy, we know, but part of our responsibility is education, and people need to understand the damage that can be caused by the ‘simple’ act of not caring for an elephant’s feet. To introduce a little levity mid-post, some days you wouldn’t know there is anything wrong with her feet. We tease her that Bambi is teaching her bad things, as she has been zooming around the habitat of late. She’s still playful, cheeky, and her spirit is amazing. But it’s hard knowing all of her pain was easily avoidable.

Her right foot is the worse of the two right now, or at least it causes her more discomfort. She generally doesn’t show outward signs of discomfort on it, but you can tell while doing foot care that she would rather bear weight on her left front foot than her right. What is going on with that foot is very similar to the other, but we believe this pocket tracks behind the 5th nail and possibly into that area of the pad.

Although Lady arrived with significant fear and trust issues, she is incredibly cooperative when it comes to her foot care. Her foot soaks are simple, and probably feel good, but she also tolerates trimming, flushing into the soft tissue, and laser therapy among other things. She lets you know when she is nearing a limit in a gentle way, by a slight turn in her nose when she’s holding your hand, or presenting the foot she would rather give you when she knows which one you are asking for. Since she is so good for everything and only does these things after most of the treatment is done, we let her know we hear her, and we adjust accordingly.

We understand that people would love for us to one day give a Lady update that talks about her feet being healed, but that is something we won’t be able to do. They will improve, but at this stage, after so many years of missed care, the best we hope for is longer lulls in anything active and many more good days than bad. Honestly, we are grateful things haven’t been worse. Her feet had the potential to go in a catastrophic direction very quickly. Thankfully that has not been the case and she has been able to enjoy her explorations and soak in the freedoms that sanctuary offers. We wish things were different, but we also know that sadly many elephants around the world suffer as well and will never have their chance at a life of sanctuary. So every smile we see on her face, every little punky thing she does, and every brave step she takes towards making friends makes our hearts a little bigger. She is a very special lady.

Your ticket for the: She Is a Very Special Lady ❤️

She Is a Very Special Lady ❤️