Settling into a Lovely New Normal 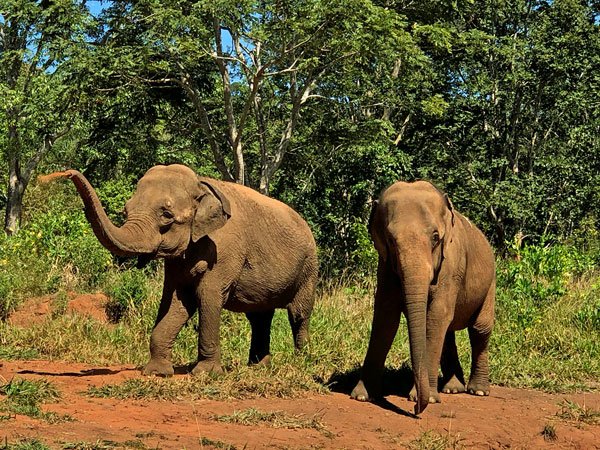 Rana and Mara are still best friends and overjoyed by life, but they are starting to figure out a new normal. These small shifts are them developing boundaries and forming a more in-depth relationship.

In the beginning, Rana was so excited with her new (or possibly old?) friend, that she fell into an older sister role. In the beginning, when Mara was reacting to birds and tapirs, Rana would lead the way and protect her. Rana, who typically ignores them, would throw up her trunk and blow in their direction to make sure that her friend was safe – or maybe just to make sure her friend felt safe. Regardless of her motivation, it was charming and lovely to watch Rana in this role. Now that Mara is more settled, Rana seems comfortable letting Mara worry about the birds.

In the beginning, Mara didn’t care much about mealtime. She was so overjoyed by the ability to graze and also having Rana, that she didn’t care what else she ate during meals. When we would deliver meals, Mara would stop eating every few moments to squeak and touch Rana. Now Mara seems to remember that hay is delicious, so she likes to grab a few flakes of hay from the piles with her trunk and walk a few steps away to eat it. Rana seems happy about this change as well – Rana is beginning to feel more like, “you are a wonderful friend, but we don’t have to share everything.” They are now each eating from their own piles of food (most of the time). If Mara gets distracted and starts to walk to Rana’s dinner, we can toss a few bananas on top of Mara’s food, and she is happy to stay with her food.

When it’s mealtime, we have them follow the four-wheelers briefly until we arrive at a safe distance to be able to put their food down. They have settled into a new normal where Rana follows first, and Mara is second. Along the way, Rana will inevitably stop for a mini touching party. At that point, Mara takes the lead and follows very quickly – she’s faster than Rana – and doesn’t seem to mind how closely Rana follows behind. (As we said above – Mara has remembered that she likes food ?).

In the beginning, they wouldn’t be more than a few steps apart and would need to stop and touch each other often. They are still doing that, but now they are comfortable being 40-60 meters apart. They are still always within sight of each other, but it’s nice to see them feeling confident enough in their life and their relationship to feel safe being apart.

They are still cute, wonderful, soft, squeaky, and happy – but it’s also really great to watch them develop balance in their relationship.

Your ticket for the: Settling into a Lovely New Normal

Settling into a Lovely New Normal