Sanctuary Memory – This Land That Nourishes Us 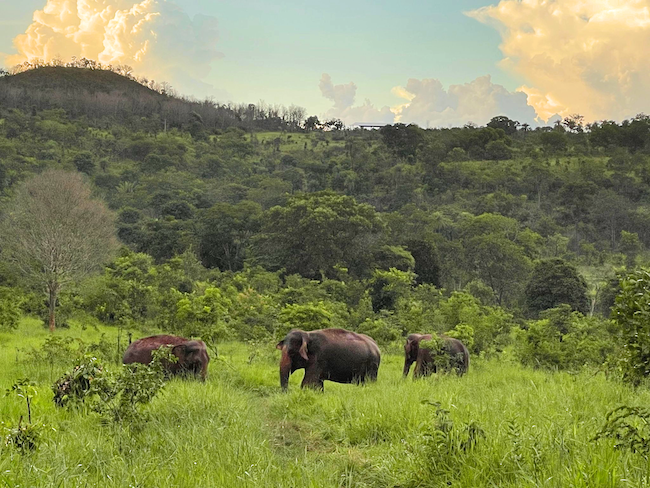 For this month’s sanctuary memory, Scott shares the process of discovering the property where Elephant Sanctuary Brazil was built – exploring the terrain and finding each magical corner it has to offer:

The land that now houses Elephant Sanctuary Brazil was not an easy find, and it took some time to even be convinced that it was the right place for us. But once we settled here, we began to understand just how magnificent it is and how perfect for elephants it could be.

Scott’s first visit to the property in Mato Grosso (after a 12-hour bus ride, then several more hours in a car) was somewhat discouraging because the actual land was so overgrown that it was difficult to trek very far inward. Initially the space didn’t seem too promising, since it had been completely over-grazed by cattle, making it seem unsuitable for elephants. In order to move further into the property, Scott and the realtors abandoned their truck and set out on foot, walking through what is now the female African habitat. The land was only pasture and sand, with nothing else around. After heading down a hill and seeing some palm trees, Scott heard some water and found a small spring. Scott, the realtors, and the landowner spent about three hours exploring the land. Scott viewed other properties, which were okay, but something made him keep thinking about this property in Mato Grosso.

After returning to the premises on another visit, Scott got a more extensive tour and was able to travel farther back to see more of what was there. It was completely overgrown and there was no way you could drive a truck through – so yet again they pushed through on foot; Scott wanted to see the creek and the back of the property, which was absolutely stunning. At that point, he began to get a bit excited because he could see glimpses of the potential there.

Once at the back of the property, Scott looked over the plots of land and could envision how wonderful it would be for elephants. Shortly afterward, Scott and Kat decided to move to Chapada – the larger city outside Mato Grosso – because the properties here were actually documented (a rare occurrence in this part of Brazil). When Kat finally came, they were able to explore the future sanctuary much more; the two stopped on the east side of the property where there’s a little pasture that looks over the lowlands – and will eventually be the expansion of the female Asian habitat. The valleys below are stunning and dynamic, with several forks to it. Kat decided then that it was time to build a house there on the land in Mato Grosso.

That outlook where Kat envisioned their home is well suited for several things: observations of the habitats and barns, watching for people entering the property, and for fire outlook. Most of all, the vista is almost indescribable. The sunsets there are so stunning that the lookout is called Sunset Vista. Scott and Kat have since built a house called The Treehouse, which showcases amazing sunrises.

As Scott and Kat explored more of the land and made their way across the overgrown terrain, they found that the property had gifts they never knew about before. Everything is so different when viewed on foot than from a truck. The two of them found elements of the land and water that would prove perfect for ESB’s purposes. One of the first times they walked down into the creek bed that is now part of the male Asian habitat, Scott and Kat saw how varied the different areas were, and how the temperature transitioned markedly within short distances. Within small lengths of space, the whole environment changes. Learning that was a big realization of how much diversity the property could offer to the elephants. The owners never took us to these sections of the property and, if they had, it would have provided a much better perspective of how perfect it really was for an elephant sanctuary.

The space is beautiful for elephants and for the wildlife that’s starting to reclaim the area. When we bought the property, we didn’t even know a tenth of what it offered. We knew it would work, but it’s so much more than we anticipated.

Photo of the female Asian habitat with Mara, Rana, and Bambi

Your ticket for the: Sanctuary Memory – This Land That Nourishes Us

Sanctuary Memory – This Land That Nourishes Us