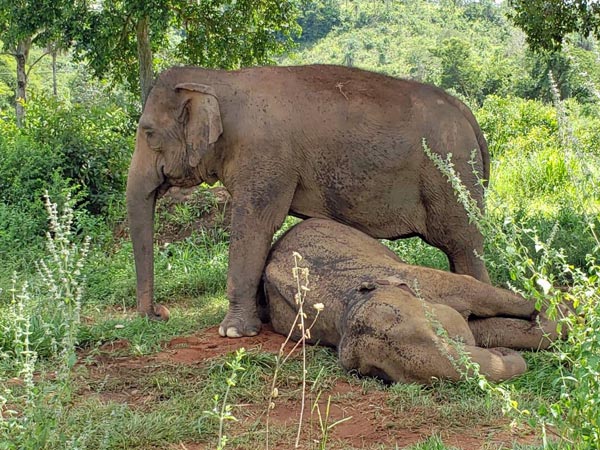 When Elephant Sanctuary Brazil first got it’s drone (lovingly called Wall-E), Scott decided to test it out by flying over the valley and down into the habitat. Maia and Guida were the only elephants at sanctuary in those days and, as Scott says, “We had been watching their relationship evolve over time and then become lighter and softer, and much more social and connected.”

But, even though you see those signs, you never really witness intimate moments between them when they are first becoming comfortable with those emotions. Though he couldn’t tell which elephant was lying down from such a high distance, he saw one of the two lying down and the other standing over top, as a protective gesture. “It was really a moment of realizing how far they’d really come,” he remembers. “When you are around elephants up close, you often observe behaviors that indicate a degree of intimacy, but when you see something like that, it really punctuates that they are truly a bonded pair.” Only elephants that are true friends exhibit that type of behavior. “This is a very protective, very nurturing thing to do, so you know that elephants have a very dear friendship when you see that,” Scott said.

With this being Scott’s first time to really see these behaviors from afar, he knew he’d witnessed a really profound moment in their relationship. It punctuated how far that friendship had come in the time they’d spent together since they arrived at sanctuary. These are the moments that reinforce what sanctuary is all about.

This photo shows a moment when Guida was experiencing some digestive issues. If she experienced incidents of gas that bothered her, she would sometimes lie down. Most times, when Guida would do this, Maia rushed over to stand in protection of Guida. Guida would rarely let us get this close when she wasn’t feeling well, so it’s unusual that we have a photo of a moment like this. It just shows the depth of their friendship and dedication to one another.

Your ticket for the: Sanctuary Memories: Scott Catches a Special Moment From Above