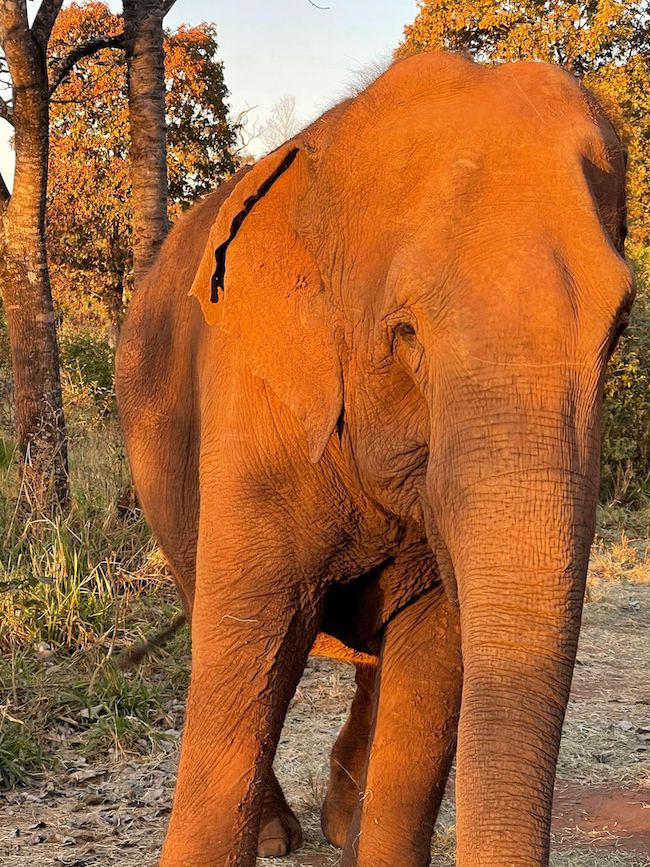 As part of our ongoing Sanctuary Memories series, Kat shares a memory of Rana that she’s always felt was profound. It is a reminder that, though captive elephants approach healing in unique ways, elephants often know fairly quickly when they are in a safe and restorative place.

When Rana was brought to Elephant Sanctuary Brazil, she had been alone for at least 40 years – perhaps longer. We don’t know that she had seen another elephant since she was a baby. As an adult, she was often withdrawn and aggressive (though she did have a veterinarian who adored her). Once we began the process of transporting her to sanctuary, she did quite well. When we finally arrived, she emerged from the transport crate with a nice energy – though she did take a moment to chase a rooster.

Maia and Guida were already here and settled at sanctuary. When Rana arrived, the two of them were on the opposite side of the habitat, essentially as far away as they could be from an arriving elephant. Within the first few minutes, Rana was smelling all around the barn, swinging her nose back and forth on the concrete, the patio, everywhere she could. Maia and Guida had been in that same spot the day before and she knew without a doubt that they were around somewhere.

Without hesitation, Rana put her head up, opened her mouth, and let out a huge calling rumble. It was not just a happy rumble, but one that was trying to communicate, as well. As Kat remembers, “People question if elephants are going to know how to socialize after being away from other elephants for so long. This was one of those moments where you realize they know exactly what to do.”

Of course, reintroducing oneself to others is never perfect and it is always unique to the individual. But in this case, Kat says, “within the first 20 minutes of her arrival, she wanted her sisters. She knew they were there and knew exactly what to do. She was going to call them and see who showed up.”

This is another simple but true example of how sanctuary allows healing to begin at whatever pace an elephant wishes – and Rana was ready. Even though we have done such damage to them in captivity, elephants can fall back into natural behaviors if you just give them the opportunity.

Your ticket for the: Sanctuary Memories: Rana’s Call to Her Sisters