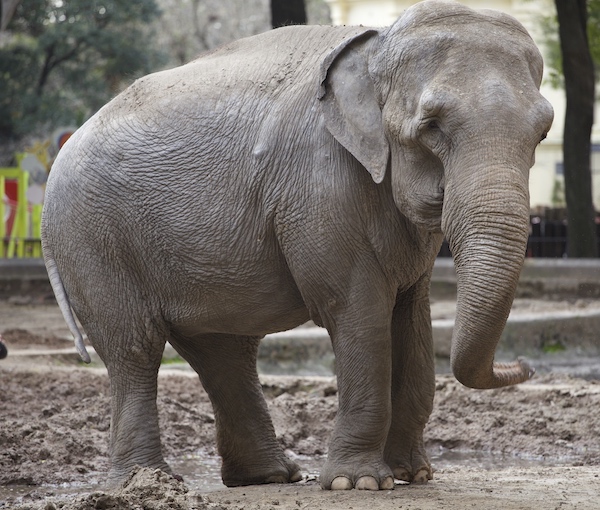 As part of our Sanctuary Memories series, Kat shares a story about the first time she met Mara at Ecoparque Buenos Aires. On Scott’s trip prior, Mara had been inside of her barn and, due to enclosure design, he was unable to get a good visual on her. So Kat’s visit was the first time anyone from the organization was able to get a better sense of who Mara was and observe what some of her normal behaviors looked like – always knowing she would become a very different elephant once she reached sanctuary.

When Kat was taken by one of the ecoparque directors to Mara’s enclosure, Mara was in the yard by herself. “She was adorable,” said Kat. “She had this big head and these perfectly shaped ears and was pretty chubby at the time. When I saw her face for the first time she was just so cute.” Kat sat and watched Mara, who walked over to a big dirt pile in her enclosure to take a nap. But in the process of taking a nap, she sat down on her right hip bone first and tried to make that comfortable by squishing into the sand a little bit. Once she lay down to take a nap, Kat snapped some photos and videos for Scott, who hadn’t been able to observe her to this degree, and they both agreed that she had a certain charm about her. “Although she was considered a dangerous elephant, you could tell from looking at her that there was a softness and a sweetness there.”

Mara would stare at the door to the enclosure where Pupy and Kuky were staying. She’d be outside in the enclosure while the two African elephants were inside, and vice versa. The two younger elephants had been with Mara since they were young calves and she had a  maternal relationship with them. Sometime prior, there had been an incident between Mara, Pupy, and Kuky that caused them to be separated. “It is incredibly common for Asian and African elephants to be kept apart in captivity because they generally don’t get along very well; even after years together there is no guarantee that conflict could be avoided in the future. Though Mara clearly was emotionally connected to Kuky and Pupy, it was understandable that those at the ecoparque were trying to prevent something truly catastrophic from happening,” says Kat.

“One of the big things that I took away from my experience with Mara was that she clearly still wanted a relationship with other elephants,” remembers Kat. She seemed to long for that sort of contact. She would call to Kuky and Pupy, but Kat never heard them answer, though that doesn’t mean they didn’t. Elephants can communicate in very low frequencies that we as humans cannot hear. “While there was some sadness to see her longing for something she couldn’t have, at the same time there was something really nice about knowing that when she came to sanctuary, she could build relationships with others again. It was clearly a big piece of her life that was missing.” When Kat left, she felt hopeful that Mara would have Rana to welcome her to sanctuary and that friendships would emerge in time. Mara is clearly adored by her friends and continues to build relationships with others at her own speed.

Your ticket for the: Sanctuary Memories: Meeting Mara