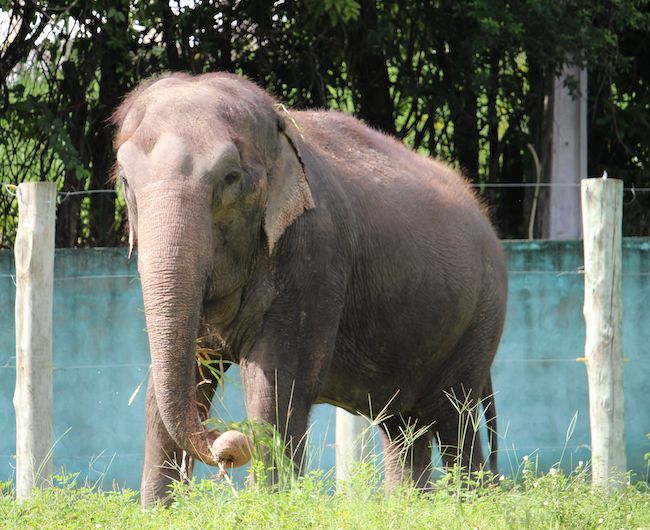 As part of our ongoing series on sanctuary memories, Scott shares some of what he recalls about his first meeting with Lady. Before Lady was transported to sanctuary in 2019, she was living in a zoo; she’d previously been confiscated from a circus, where she’d lived for decades, and a court was attempting to find the right home for Lady – a place where she would receive the best care possible.

Our first visit to the zoo where Lady lived was an observation trip, so the main focus was on her physical condition, her environment, and her care. That doesn’t mean that we weren’t able to learn things about her personality right away, though. Scott remembers, “You could see there was a lot of life in her; that was a big takeaway. Her feet were, of course, in terrible condition, but she had a lot of spunk and spark inside her.”

Lady’s enclosure was mere feet from an area that was easily accessible to outsiders, and we don’t know what happened security-wise after hours, but the potential breaches of her home space caused her to be protective from the beginning. She tended to hide out in the small barn in her yard – and she clearly wasn’t using the yard much. Looking back, this likely had much to do with the fact that she may not have felt physically or emotionally safe in her environment.

On that first visit, we witnessed Lady starting to climb out of her electric fence, because it wasn’t working and she knew it. That was the first sign of independence and self-determination that we saw from her – and it certainly wasn’t the last. She was very curious about the new people who were visiting and, though she was clearly guarded emotionally, she was alert and wanted to know what was going on.

As we were trying to determine the logistics of a transport for Lady and, honestly, asking the basic question of whether or not she could travel because of the state of her feet, she began to show us the fight she had in her. “We could see what she had the desire to do,” remembers Scott, “and, though her feet were grossly inflamed, she had a lot of fight in her. That gave us the confidence to say that Lady could be moved.” Because that first visit was primarily an investigative one, it was tough to walk away from Lady, says Scott. “We left with a giant unknown of whether she was going to get the level of care she needed, because she was not in good shape. There’s a feeling of helplessness, knowing that you could potentially make an impact on her life in a situation where others don’t have the capacity. Leaving there was actually harder than seeing her in that place, because her spark was evident from the beginning.”

By the time our team returned to relocate Lady, she was truly engaged. She was curious about the transport container and went inside within the first couple of hours after it arrived. She was still quite protective and guarded, but she was showing us her toughness and letting us know she could make it to sanctuary. “We watched her go up and down hills to get to the crates, when there were easier paths to take. She still had her signature vibe that said: I’m in charge; this is my world. Lady had clear boundaries that were easy to cross. She was very much herself from the beginning. Everything she is now – demanding of excellence, aware of her personal space, wanting to be in charge of the world – that was present from the beginning and it was an intriguing beginning to a rewarding relationship.” Charming, but demanding from our first meeting – Lady is a survivor with an undeniable spark.

Photo of Lady before her move to ESB

Your ticket for the: Sanctuary Memories: Meeting Lady