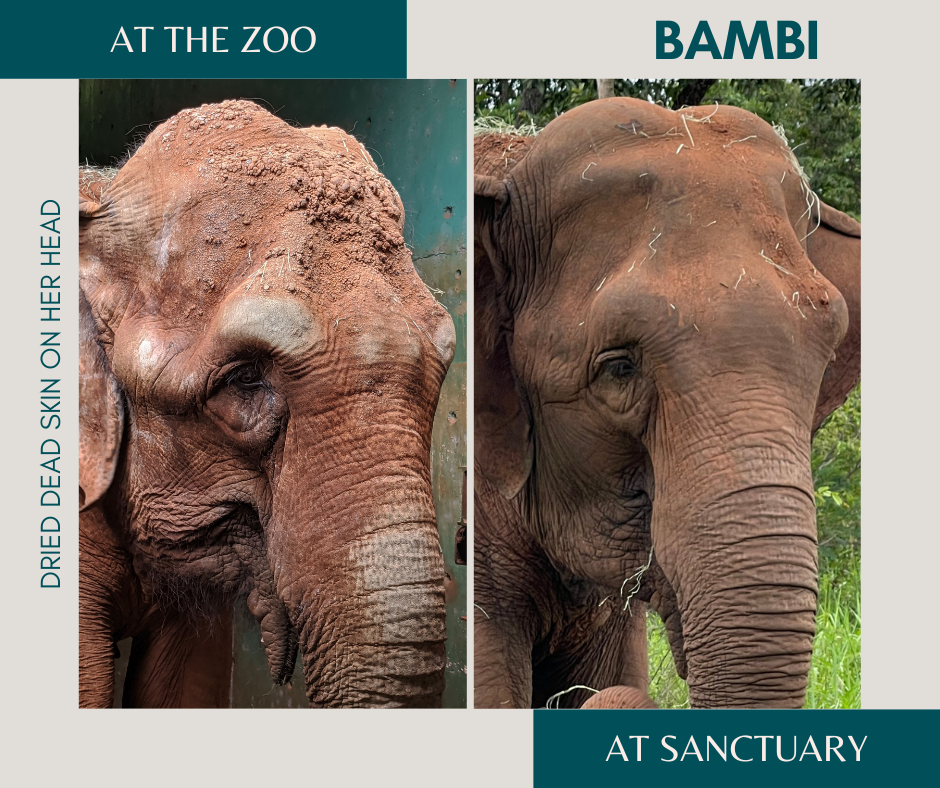 As part of our ongoing Sanctuary Memories series, Scott talks about his first meeting with Bambi and how deeply she changed between the first time they saw one another and the second. That first meeting occurred in 2013, when Bambi was living at the Leme Zoo in Sao Paulo. Scott remembers, “She was adorable and cute and shiny and bright, even though she lived in a small space. Her personality was charming and endearing.” A couple of years later, Bambi was moved to the Ribeirao Preto Zoo and, at that point, everything changed for her.

At the new zoo, she lost a lot of the spark we initially witnessed and she had become very reclusive. As Scott says, “We found her in a state of being closed off in her own little world. She didn’t want to go outside; she was not very expressive.” Though she would interact with some of her caregivers, she also liked to hide in a corner of her barn – sometimes for days at a time. When Bambi finally built up the courage to emerge from her small space, she’d sometimes stay outside for two to three days. We’d been told that Bambi did not get along with Maison, the other female Asian elephant who lived next to her, and we saw video of an altercation between the two of them. Her fear was palpable. She seemed to be a very emotionally strained, uncertain individual.

When our team arrived for her move, Bambi was very curious, but incredibly watchful of everything we did. She appeared ready for something to go wrong at any moment. As Scott recalls, “When she started to build more confidence and come into the crate and explore, it was with a lot of trepidation, though she did seem to like getting some extra attention.” Then, seemingly out of nowhere, she would go back to the corner of her barn and hide in that space for hours before slowly emerging. At that point, the team felt like we were starting from zero again. She’d take baby steps toward the container, lots of smells, never going all the way in – no matter what we did. Once she finally went all the way in, she heard us working with the door a little bit and immediately ran back inside for about half a day. Just a little bit of change was overwhelming to her. Bambi needed coaxing, then space and time before moving further. Once you could see a small change in her, she would accept encouragement and might do more, as long as she didn’t feel rushed.

“It was actually disheartening to see how much she changed from one zoo to the next. She was closed off to so much of the world. She still had that bright spark and bright eyes and sweet personality. She was curious and engaging,” says Scott. “But that curiosity was always combined with trepidation and concern.”

Of course, once Bambi came to sanctuary, her world was immediately different – and she was also different, almost from day one. She was ready to go and, though she still had a number of insecurities to manage, she was not remotely like the elephant we’d seen at the zoo. Bambi shifted out of that mental space quickly, which was amazing to see. She was opening herself up, vulnerabilities and all, to a new world, and she seemed brilliant, radiant, and amazing; she continues to explore her world and herself – finding new things to celebrate almost every day.

Photo of Bambi before and after sanctuary

Your ticket for the: Sanctuary Memories: Meeting Bambi